Home Our TownAptos 300 Wins for Randy “Coach B” Blankenship
AptosSports

300 Wins for Randy “Coach B” Blankenship 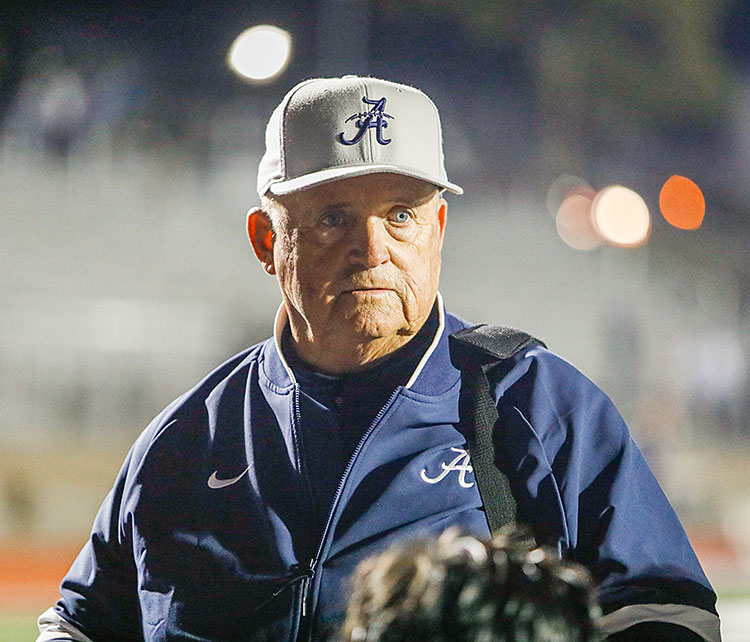 Aptos High School football coach Randy Blankenship chalked up his 300th varsity win in October, becoming the 12th in California to do so — in other words, a rare feat. 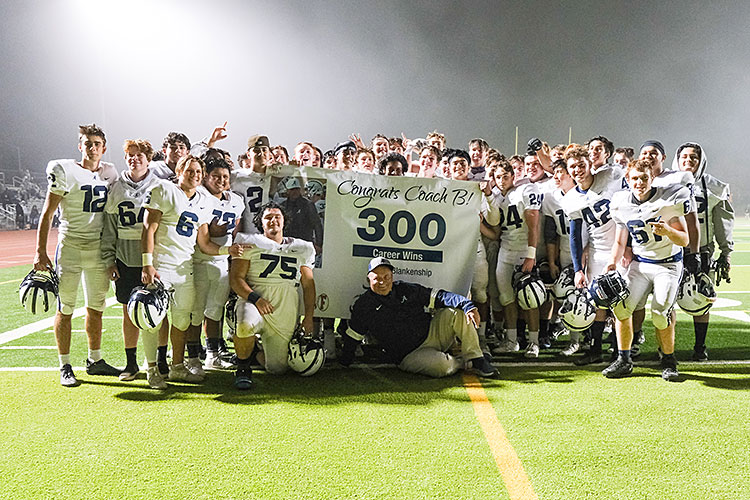 Blankenship, 68, has been a high school head football coach since 1984 and in Aptos since 2010 — in other words, experience and longevity.

When the COVID-19 pandemic arrived in 2020, halting high school sports and then restarting with restrictions not seen in a century, he adapted – in other words, persistent.

He’s a guy who thoroughly enjoys coaching high school football players — even if he has to wear a mask.

He’s a guy who wants to impact the lives of his student athletes.

He’s a guy who believes in the wing-T offense, a formation defensive coaches are not used to seeing, one that relies on deception and finesse– and his players make it work.

In 2020, ScorebookLive.com reported Blankenship is the second active winningest coach in California high school football, about 20 wins behind No. 1 Bruce Rollinson of Mater Dei.

He has been chosen Coach of the Year in four different sections — Sac-Joaquin, Central, San Diego and Central Coast.

He started out as a rookie assistant coach at Mira Loma High School in Sacramento 43 years ago.

His first job as football head coach was in Nevada Union High School, where he racked up a 69-19-2 record, with 9-6 in the playoffs and six league titles in seven years. He’s in the Nevada Union Athletics Hall of Fame.

Next he went to Clovis West in Fresno, winning four section titles with the Golden Eagles from 1992 to 1998 and 1998 State Coach of the Year. His team was invited to the Santa Ana Bowl (where Bruce Rollinson’s Mater Dei team won).

Then he coached two years at Fallbrook, winning a section title in 2000 and ranking No. 11 in the state.

He coached in the football-fanatic state of Texas at Granbury High, a small town outside Dallas-Fort Worth, thinking it would be good preparation if he went into college coaching.

He told CalHiSports.com he decided to leave when an assistant superintendent lost her job over a school board dispute.

Blankenship got hired at Capistrano Valley in 2002, but didn’t stay long. He told CalHiSports.com he was one of 626 employees in the district to get a pink slip.

Fortunately, he got a call about coaching and being athletic director at Madera in the Central Valley. This meant his new team would be playing his old school, Clovis West, and other football powers in the league.

Those five years were challenging, with more losses than wins. Only one team made the NorCal rankings.

The beach is what brought Blankenship to Aptos.

The Aptos community is what kept him here.

He appreciates the support from parents, students and the community.

In 2018, when CCS had three Open Divisions, Aptos made the Open 3 bracket and won the title in a thriller, 35-34, over Sacred Heart Prep of Atherton. The Mariners got into the NorCal regionals – a first for a team from Santa Cruz County, the season ending with a 28-20 loss to McClymonds of Oakland.

This year’s team is 7-1 and tied for 2nd place behind undefeated Salinas in the Gabilan division of the Pacific Coast Athletic League, which includes Palma and Hollister.

The season will end with a non-conference game under the lights at Monte Vista in Watsonville at 7:30 p.m. Friday, Nov. 5.

When he’s not coaching or getting ready for next season, he and his wife Rhoda enjoy going to the beach. And they have three grandchildren.

If you see Coach B, tell him “Congratulations!”