The American Red Cross of the Central Coast honored 18 local residents and an area fire department at a recognition event for chapter volunteers from Monterey, San Benito, and Santa Cruz counties. The annual event, originally planned as an in-person event this past spring, was delayed and then held virtually on Dec. 8 because of COVID-19 precautions.

A volunteer in Santa Cruz County since 1984, Dellamora has been a staple of the local chapter’s Disaster Cycle Services team. A veteran of more than 30 disaster-relief operations, she has proven herself time and again to be a dedicated steward of the Red Cross mission.

“Not only has Tiki been a tireless volunteer, she is also a joy to work with and just a real treasure,” said Michele Averill, CEO of the local chapter. “Tiki embodies the spirit of the Red Cross, and we were thrilled to present her with the Clara Barton Award.”

In addition to the Clara Barton Award, the following awards were given to local volunteers:

Other volunteers were celebrated for the large number of hours they devoted to Red Cross service during 2019. 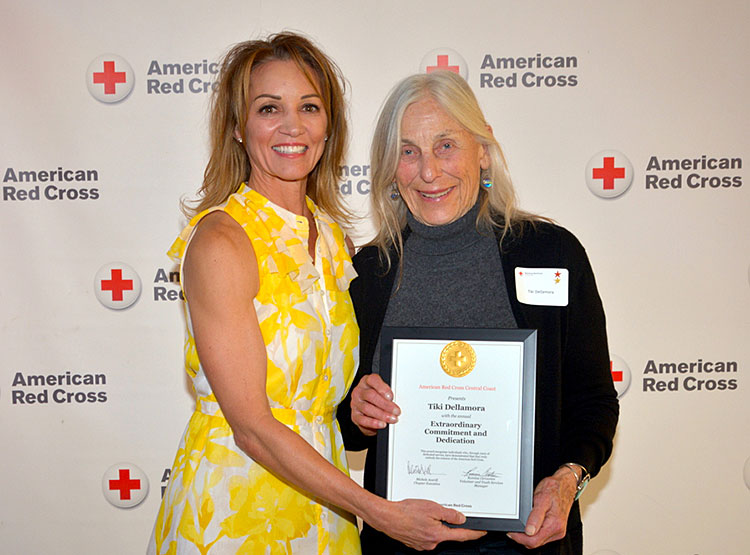 “Our dedicated and wonderful volunteers have continued to support the mission of the Red Cross, even during this challenging time of COVID,” Averill said. “And during the devastating wildfires in our area this year, they heroically supported our disaster relief efforts even while, in some cases, they had evacuated because their own homes were threatened.”

Three members of the family — Danny Lucas Jr. of Watsonville, Chad Lucas of Watsonville, and Raymond Harris of Aptos received Red Cross awards earlier this month for the “extraordinary action” each took to save Danny Lucas’s life following a hunting accident in Montana.

To Become a Red Cross Volunteer: Volunteers constitute about 94 percent of the total Red Cross workforce to carry out humanitarian work.

Red Cross volunteers are trained to meet the needs of those affected by disasters, providing food, shelter, and comfort for families affected by major disasters such as fires, floods, and earthquakes as well as helping local residents prepare for and recover from emergencies of all kinds.

We’ll find the position that appeals to you and allows you to use your skills and talents. Email [email protected] to get started.

With offices in Monterey, San Benito, and Santa Cruz counties, the American Red Cross shelters, feeds and provides emotional support to victims of disasters; supplies about 40 percent of the nation’s blood; teaches skills that save lives; provides international humanitarian aid; and supports military members and their families.

The Red Cross is a not-for-profit organization that depends on volunteers and the generosity of the American public to perform its mission. For information, visit redcross.org/centralcoast or call 831-624-6921. You may also find us on Facebook and Twitter.

Second Round of PPP Loans