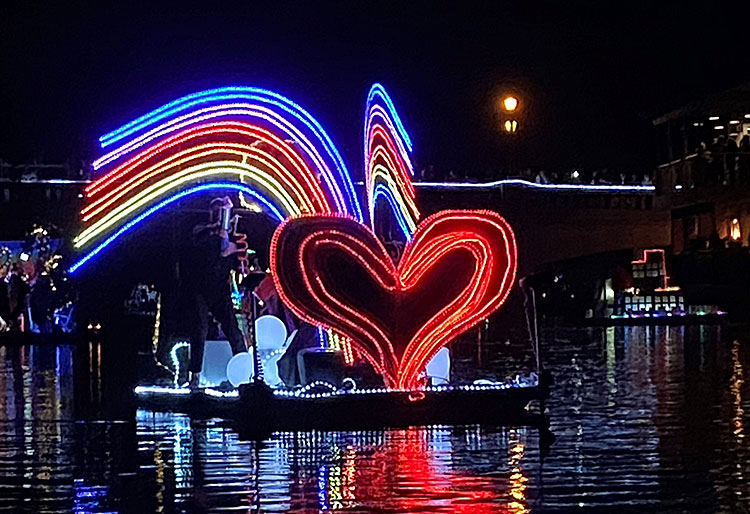 In difficult times it is with committed effort that the Capitola Beach Festival Committee delivers — and, does so with lights, music, a creative message, and the serendipity of a parade floating down a creek at night, under a bridge, on a barge with barely a paddle. 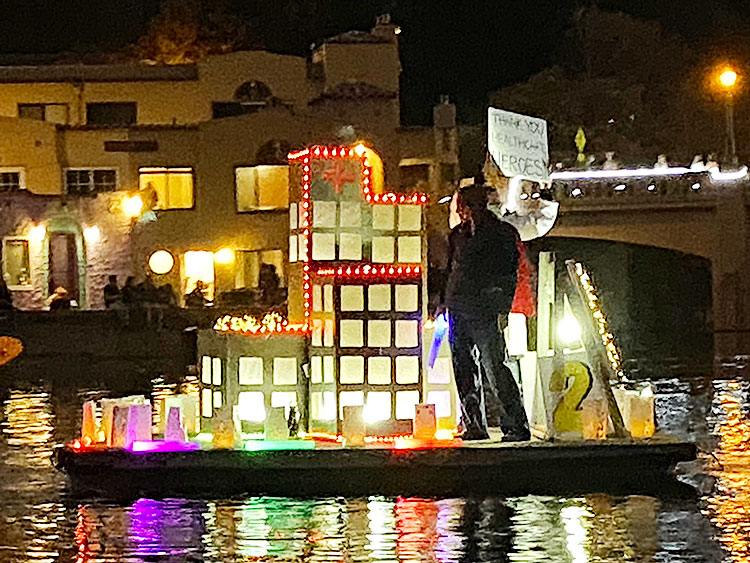 Built to the festival theme “Community Spirit,” the floats were as diverse and creative as the teams themselves.

Opening the parade was a lit rowboat celebrating “Our Community in September.” Neal Savage, chair of the Festival’s Rowboat Races, invited the crowd to join the races and baited them to come out to the Fishing Derby with a silvery catch on his fishing pole.

With just 10 days to build, late entry “ScaAvengers” group’s “Our Community Superheroes” honored healthcare workers and featured a lit hospital made of recycled cardboard surrounded by luminary bags carrying messages with thoughts of friends and families impacted by COVID-19. A family effort, led by a grandmother, her three children, their spouses, and seven grandchildren ages 2-10.

With just 12 days to prepare, the Cork and Fork Friends went old-school, with a floating music festival, tie-dye backdrops, brilliant lighting techniques reminiscent of theatrical productions, and Glennie B’s live performance of “Try to Love One Another Right Now.” Their float placed third and receives a $500 donation to their favorite local charity.

Two-time parade winner: Team ‘Tola’s “One Love” lit the creek with a giant beating heart, a vibrant rainbow all brilliantly lit by 5,000 LED lights, rope lights, and strobe and a lightshow coded by their “next generation” builders. Hearts swelled to their message of Love, Community and Togetherness during this time of rebuilding and reopening, closing with a quote from Mr. Rogers “Won’t you be my neighbor?” Team ‘tola’s entry took second place and a $750 price for its favorite charity. 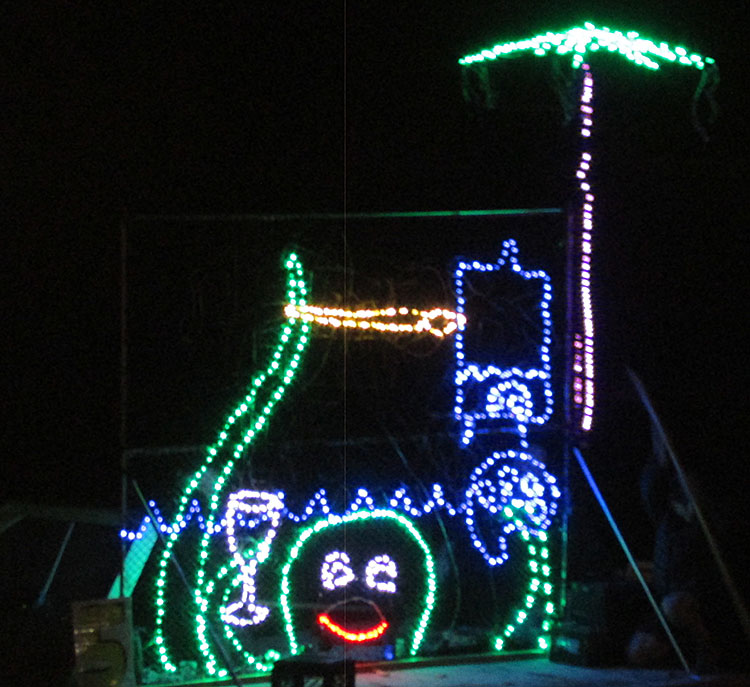 The “Jewel Boxers” returned this year with “The Spirit of Capitola” celebrating Capitola and its many community activities. The second place winner in 2019, said they “pulled out all the stops” this year, with good results. A giant screen, lit on both sides with an animated and talking green octopus who highlighted the Ukulele Orchestras, Art and Wine, Monte Fireworks and Wednesday Night Concerts. The octopus closed with a plea to stay safe and get vaccinated. The Jewel Boxers took pride in their entry’s recyclability and plan to reconfigure it for 2022. The Jewel Boxers took first place and a $1,000 donation to charity.

Closing the parade, “Good Job” was designed and built by the Parade Chair Thea Luiten, and several Beach Festival Committee members. Simply and forthrightly, their float expressed gratitude and recognition to all hard working community members throughout this year of “a world out of order” and was dedicated to her son, a physician’s assistant, Emergency Room colleagues and her nursing students at Cabrillo College.

As he witnessed, with hundreds of onlookers, parade announcer Michael Termini, exclaimed “What a comeback!”

Next year you too can participate. The festival provides the barge and building site, you provide the lights and the fun.