Scotts Valley’s Conor Gilliam, won gold in the 800-meter race at the USATF National Junior Olympic Championships, and achieved All-American status for boys 13-14-years-old on July 28. The meet took place at the University of North Florida in Jacksonville. 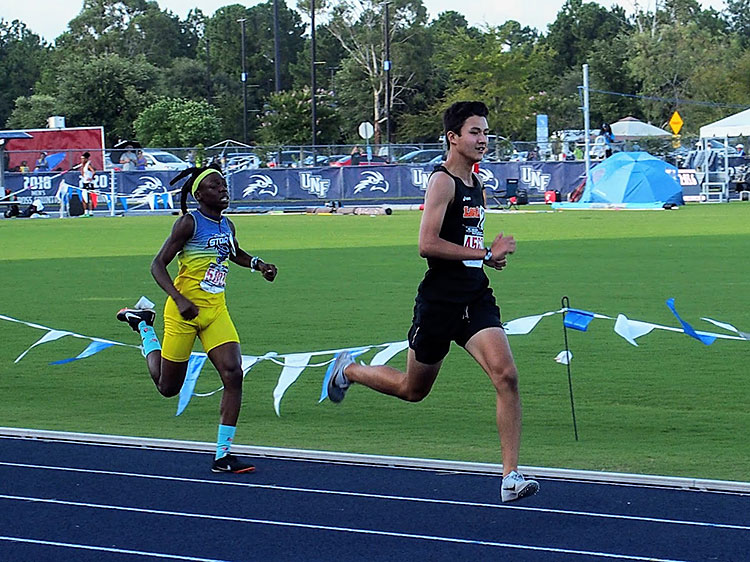 Conor Gilliam (right), 13, of Scotts Valley, on his way to a first place finish in the National Junior Olympic 800-meter race.

Conor, 13, had to compete against a field of 104 entries in the 800-meter trials in order to make it to the finals.

The top eight fastest times from the trials made it to the finals.

The trials had five heats. Conor won his heat and was the fastest qualifier with a time of 2:06.81.

The top eight runners in the final race would be All-Americans, it was just a matter of what positions they would achieve.

It was a hot and humid 104 degrees in Jacksonville on the day of the 800-meter final race. The runners were all checked in, ready to go. Due to the unhealthy heat index, the race was postponed until evening just 15 minutes before the scheduled 2 p.m. start time. By the new start time of 7 p.m., it had cooled to 95 degrees.

In the final race, Conor stayed in 3rd and 4th position through the first 600 meters. The first half of the race was a slow pace, so he was ready to use his kick when it came down to the end. He moved into 2nd on the final turn with 200 meters to go. With 150 meters to go, Conor started his sprint, catching and passing the leader with 40 meters to hold on for gold.

Conor attends Monte Vista Christian School in Watsonville, where he will be an 8th grader. 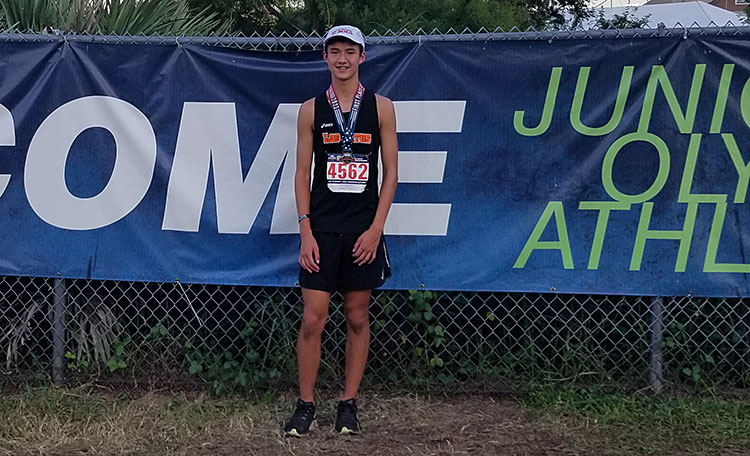 His inspiration for running: His older sister Caelan, who competed for Los Gatos Track Club and runs cross country and track at Monte Vista.

Following in her footsteps, Conor competes for the Los Gatos Track Club, former home to Scotts Valley High’s Jeremy Kain, state champion in the 1,600 this year.

Conor and his teammates have been training since December for this year’s Nationals.

For three years, Conor has dreamt of becoming an All-American, and wearing the famous All-American hat. With determination and hard work, he now has two of them.