Editor’s Note: This letter from District Attorneys around California is being published to make our readers aware of statewide fraud that may involve up to $1 billion in tax dollars.

We write today (Nov. 23) to request a meeting on an urgent matter — widespread EDD fraud occurring in California. In addition to a meeting, we request your personal involvement in halting what appears to be the most significant fraud on taxpayer funds in California history.

District Attorneys and federal prosecutors, along with local, state, and federal law enforcement, have discovered that there is rampant and large-scale pandemic unemployment assistance (PUA) fraud occurring in our communities, in the jails, and in state and federal prisons. General estimates of the money already paid due to this fraud could near $1 billion. Undoubtedly, this money has been utilized to further criminal conduct.

Fraudulent unemployment claims deny those who have lost their employment, many due to COVID-19, who are legally eligible for benefits and are truly in need from getting the financial assistance they need.

We write today to request your personal involvement in halting what appears to be the most significant fraud on taxpayer funds in California history.

There is no dispute that since the pandemic began in March 2020, EDD has faced unprecedented demands for unemployment insurance. Due to these demands and challenges faced by EDD, in late July, you created an EDD “Strike Team” to create a “blueprint” for improvements to EDD. You also directed that hundreds of employees be added to help process the nearly 1 million claims that were backlogged.

In September, the “Strike Team” made several recommendations to reform EDD in a written report. Nothing in this report specifically addressed preventing or detecting fraud involving incarcerated individuals.

Scope of the Problem 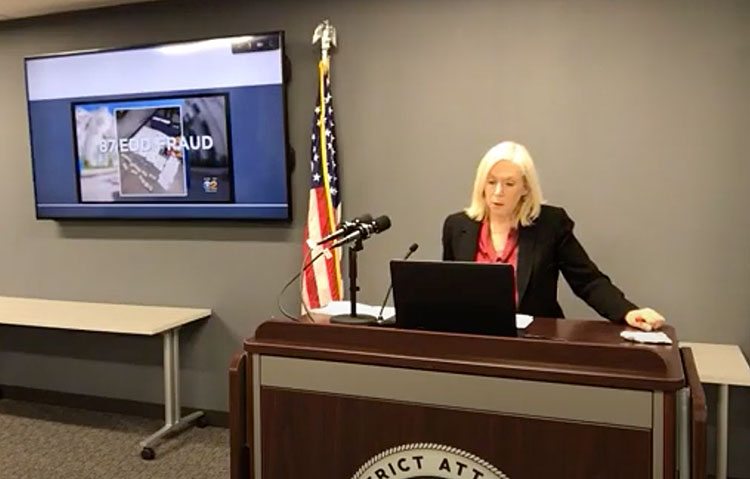 It is no secret that fraud in widespread in jails and prisons. In fact, even incarcerated inmates have themselves made reports. On Oct. 31, 2020, Amber Jackson, an inmate serving a life term in state prison, wrote an article for the Santa Monica Observer, entitled, “California Prisons Are a Major Source of EDD Fraud, Including Identify Theft.”

In that article, Jackson states, “I see and hear my peers talking about this (EDD fraud) all the times. It surprises me how easy this is. There are even a couple of cases I’ve heard of the unemployment department sending checks directly to the prisons! What?? Oh yeah, this is an industry all its own. Now, don’t get me wrong. Some prisoners’ identifies are used without their knowledge or consent by their families or anyone who manages to get their personal information. Identify theft knows no boundaries.”

A recent KCRA3 investigation found, “Thousands of envelopes containing fraudulent California Employment Development Department claims that were sent to residents across the state are part of several fraud schemes… The schemes involve identify theft, the dark web and possibly an international crime ring.”

Individuals perpetrating this fraud are even flouting their illegal windfalls on YouTube. A link to this video can be found at www.youtube.com/watch?v=niBFYeo2Ltk.

Within the last two months, state and federal prosecutors have become keenly aware just how massive and pervasive this fraud is within our jail s and prisons. Tens of thousands of local, state and federal inmates are involved. Unemployment claims have been made and paid in names of death row inmates and include some of California’s most notorious murders such as Cary Stayner, Wayne Ford and Isauro Aguirre.

As a result, California’s elected District Attorneys have created a Statewide EDD Fraud Task Force to combat this massive fraud. Law enforcement and the California Department of Corrections and Rehabilitation are critical partners within the Task Force. While EDD investigators have also assisted with these efforts, they have only 17 fraud investigators for the entire state and are therefore understandably overwhelmed by the amount of work this will entail. As such, the District Attorney Investigative Divisions are assisting with these investigations. The enormity of this week cannot be underscored enough. Quite frankly, this may be the largest fraud investigation in California history.

In response to a federal subpoena, the California Department of Corrections and Rehabilitation (CDCR) have provided the U.S. Department of Labor with their entire inmate population list, across all institutions. The DOL thereafter ran this data against unemployment insurance date for the period of March 2020-August 2020./ This information was then provided to EDD. In the last two weeks, the results of this data have been released to the Statewide Task Force.

The Task Force has extensively researched this data and found the following:

The data revealed the following:

There are currently over 700 inmates on death row. They represent the worst of all murderers. An extensive review of the data of death ro inmates revealed the following:

There are 58 counties in California. Early data shows that fraud within the county jails is also rampant.

Much like the state prisons, it is anticipated that fraud will exist in every county jail facility. Even small county jails have identified losses in the millions. Statewide, the fraud within the jails could balloon to hundreds of millions of dollars.

Fraud in Other Detention Facilities

The Task Force is additionally concerned that this fraud may also have permeated other facilities, including State Hospitals that house the following types of inmates or patients: Not guilty by reason of insanity, incompetent to stand trial, sexually violent predators, other civil commitments related to mental health.

In addition to this shocking information, Task Force members discovered that EDD has no cross-match system to stop the continued payment to incarcerated inmates. California is the most populous state in the country. It has been hailed as the center of technology. Yet the EDD’s lack of technology to cross-match incarceration data is costing this state hundreds of millions of dollars.

In 2016, the National Association of State Workforce Agencies conducted a national survey to gather data to improve the integrity of unemployment insurance benefit around the country. In response to queries related to cross-matching incarceration data against each state’s Unemployment Insurance Agency, the survey found:

Sadly, California does not cross-match. While the latest EDD improvements with “ID.me” should be applauded, they can be easily overcome by co-conspirators manipulating this system.

Thus, this widespread fraud will continue. Undoubtedly, millions more will be paid to those who are entitled to such benefits.

Undoubtedly, those lawfully entitled to benefits will continue to suffer at the hands of these criminals.

Based upon the clear data demonstrating widespread fraud within correctional facilities, we respectfully request the following steps immediately:

By immediately addressing these systemic issues, those rightfully entitled to and desperately in need of unemployment benefits will obtain the assistance needed.

The California District Attorney’s Statewide EDD Fraud Task Force continues to vigilantly work against fraudulent conduct that has so horrifically impacted law-abiding, legally entitled recipients from receiving their benefits. We stand ready to assist in any way to address these challenges.

Editor’s Note: Gov. Newsom responded with a letter to the district attorneys saying “bad actors took advantage of the crisis to abuse the system,” and new security were implemented in early September after an uptick in claims. EDD and the Department of Corrections and Rehabilitation are working with the U.S. Department of Labor to crosscheck unemployment claims against state prison rolls, according to Newsom’s letter. State Labor spokeswoman Crystal Page told the Sacramento Bee via email that 35,000 records have been checked, including 19,000 PUA claims totaling $380 million and about 3,700 of the Bank of America debit cards were frozen. El Dorado District Attorney Vern Pierson told the Bee the state got a $1.7 million federal grant for one year to run a system from Pondera Solutions of Folsom to crosscheck claims with publicly available data, but EDD did not keep the system.

$100 Million For Pedestrian Safety in California