Home Our TownWatsonville Fair Barns, Built in 1955, To Come Down
Watsonville 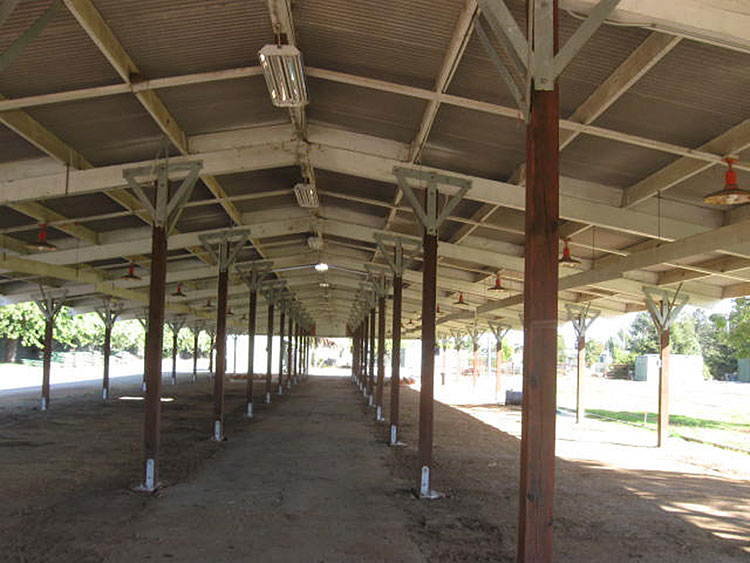 The Santa Cruz County Fair will look a little different this year.

On July 19, the Santa Cruz County fair board voted 6-2 to take down the 67-year-old pig and sheep barns, which were declared unsafe by a state agency, and create temporary quarters for this year’s fair Sept. 14-18.

Don Dietrich and Tony Campos voted no. They favored fencing off the barns and discussing the matter once the state agency that oversees the fair has given approval.

Those favoring immediate removal of the barns wanted them down before the fair, which is expected to draw thousands of attendees, to address safety concerns.

Dave Kegebein, the fair CEO, proposes to replace the old barns with a new multi-purpose building, which he estimated could cost $8 million to $10 million, as fundraising allows.

An inspection in 2012-13 found that more than half the posts holding up the roof had rotted off their base, resulting in annual investments to make the barns safe for the fair.

Kegebein is optimistic about fundraising. At the fair board’s livestock committee meeting, he said, “Tremendous supporters will advance these projects under the right conditions. You have to think flexibility.” 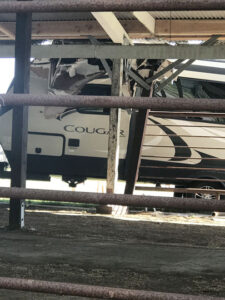 The fairground’s livestock barns were declared unsafe but no “Keep Out” signs were posted on the side where campers were staying.

Fairs in Salinas Valley and Chowchilla have invested in new event centers.

New construction at the fairgrounds in Watsonville would allow for a service road wider than what exists.

Kegebein sees this as an opportunity to reduce the odds of a mass shooting like the one at the 2019 Gilroy Garlic Festival where the gunman used bolt cutters to cut through a wire fence and evade security screening.

He also sees a new facility as a revenue generator, rented for equestrian events, trade shows and other activities while being available for emergency housing for livestock, as needed during the 2020 CZU lightning fire. (Santa Cruz County has a contract with the fair for emergency housing.)

Rental demand is high at the Santa Cruz County fairgrounds, with bookings full for the rest of the year, according to Kegebein.

Members of the fair board’s livestock committee recommended temporary facilities for this year’s fair and pursuing a new multi-purpose building for the future.

For Kyle Middleton, safety is the top priority.

“We’ve got to move with the times,” said Danny Naranjo.

The 4-H youth showing pigs, sheep and goats will have to provide their own water this year, a requirement at some fairs elsewhere.

Not everyone supported Kegebein’s proposal.

Phillip Carranco, whose daughter raised 300 chickens in Aromas for the fair, had concerns about the accuracy of the scale to weigh animals for market, which requires calibration on a steady surface, which the barns provided.

Aptos resident Becky Steinbruner wants the California Construction Authority, which provides finance, design and construction services for health and safety and other projects at fairgrounds and evaluates risks and potential issues, to be involved. 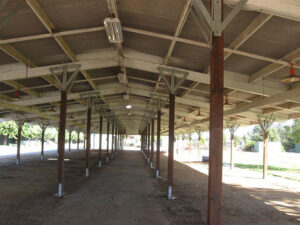 Livestock barn at the county fairgrounds in Watsonville.

In May, Randy Crabtree Jr., executive director of the California Construction Authority, emailed her to say, “Santa Cruz County Fairgrounds and the State of California is ultimately responsible for construction scheduling and facility planning. CCA remains ready to assist when requested by any of these bodies.”

Steinbruner also wants the fair board to have a public discussion on proposed agreements between the fair and the county Board of Supervisors on a 38.5-acre property at 188 Whiting Road next to the fairgrounds where the County intends to create equitable access to athletic fields, hiking, and healthy recreation. The price is $2.31 million, with a 12-month purchase option ending Nov. 12, 2022.

As for her concerns about emergency housing during fires and other evacuation scenarios, Kegebein told the fair board that there are plans to provide emergency shelter for animals should disaster strike.

Disaster struck Thursday with the Anzar fire in Aromas, a rural community of 2,600 that straddles the borders of San Benito and Santa Cruz counties.

At noon Friday, Jessica Ayala, who lives in Aromas with a home address in Santa Cruz County and San Benito County at the foot of her property, emailed Santa Cruz County officials of her safety concerns relating to the Anzar fire.

“The people on the Santa Cruz County side have not received any instructions on what to do if we need to evacuate, have we been forgotten? We live across the street from each other and live in two different county’s,” she explained. “If we need help and are evacuated, is our designated evacuation facility the Santa Cruz County Fairgrounds?”

She added, “Many slept with their animals in their trailers over night in fear of last-minute evacuation, some don’t have trailers to evacuate their animals.”

CalFire’s San Benito-Monterey unit was in charge and the Santa Cruz County Fairgrounds was booked for a horse show July 18-25.

As the Anzar fire grew, some residents were ordered evacuate while others were under an evacuation warning.

As of Tuesday morning, CalFire reported the fire was 95% contained and residents allowed to return home.