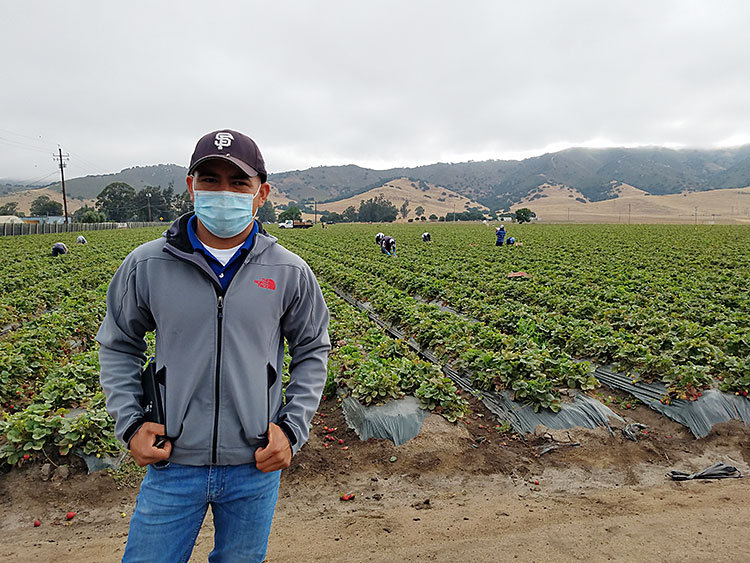 Over the past seven years, former farmworker Aldo Gonzalez has expanded his farm business from five to 44 acres, helped by annual operating loans from California FarmLink, an Aptos-based nonprofit that since 2013 has also operated as a Community Development Financial Institution.

Gonzales grew up on a family farm growing vegetables in Oaxaca, Mexico, and as a farmworker in the U.S. was determined to have his own business. Now, Gonzalez Organic Farms in Monterey County specializes in growing strawberries, which he sells at farmers’ markets in Cupertino, San Juan Bautista, Oakland and Sunnyvale, and is a valued grower for large strawberry shippers.

Gonzalez is just one of a growing number of Latino farmworkers who have become successful farmers in the U.S., said Reggie Knox, FarmLink’s executive director.

“The overall number of farms is going down, while the proportion of Latino farmers is going up,” Knox said. “We want to serve this community and see it as important for the future of farming in California.”

In fact, the USDA Agricultural Census found more than 14,000 registered Latino farmers and ranchers in California.

And Latino farmers are growing at twice the rate of traditional farmers.

Knox said the support of Farm Credit and other sponsors is essential to FarmLink’s success.

“The earned income we get from making loans is not enough to support operations, so we supplement that with grants and sponsorships,” he said. “We appreciate the support from Farm Credit.”

Keith Hesterberg, president and CEO of Fresno Madera Farm Credit, noted that FarmLink has expanded its efforts in the Fresno area.

“For the past six years, Farm Credit has also been a proud sponsor of the Latino Farmer Conference, which drew some 300 participants in 2019, before COVID-19, and returned this year with a series of webinars,” Littlefield said. “Nurturing beginning farmers is part of our mission and we’re happy to support FarmLink’s work.”

Knox said since establishing the CDFI, FarmLink has loaned $31 million to more than 300 borrowers, 60% of whom are Latino and up to 35% are women.

FarmLink works closely with ALBA — the Agriculture and Land-Based Training Association — an incubator program in the Salinas Valley that provides land and support for beginning farmers. During the six-month course, ALBA provides a half-acre of land to learn to grow crops on. Once the farmer graduates, FarmLink comes in.

“When the beginning Latino farmer comes out of the incubator, we may help them with their first lease and provide an initial operating loan of $10,000 to $20,000 to get started. The next year the farmer may require $25,000 to $50,000 to scale up. Whenever possible, those leases include a first right of refusal for the farmer to purchase the property, because we encourage people to build a pathway to ownership so their businesses can generate multi-generational wealth,” he said.

“Farm Credit is the largest lender across the country, helping farmers of all sizes. We really appreciate the partnership and hope to work closely with its associations in the future, to make sure they are there when farmers graduate from our programs and are in need of a larger loan,” he said.

FarmLink is a Santa Cruz County-based organization focused on helping small farmers and people of color succeed in agriculture. Farm Credit has supported FarmLink as part of its commitment to diversity in agriculture. To reach California Farm Link, call 831-425-0303. For more about Farm Credit Alliance, see www.farmcreditalliance.com/