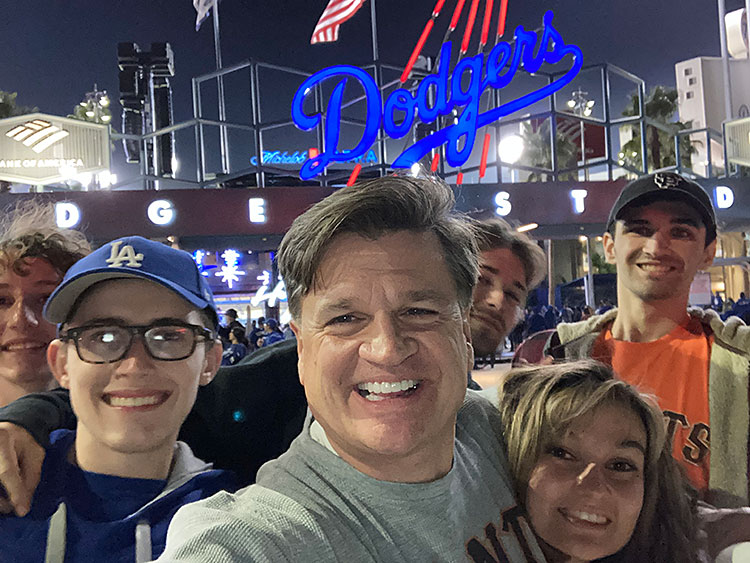 As a young girl, seeing the dent in the skull of a gentle kindly man whose only crime was wearing a San Francisco Giants jersey to a baseball game in Los Angeles was something I will never forget. 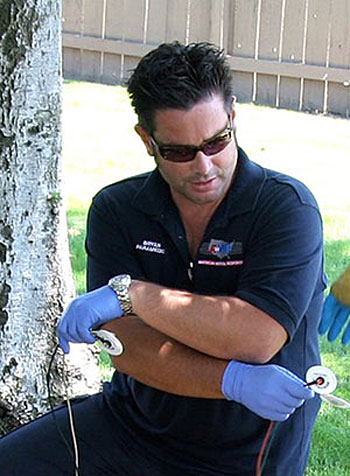 I was an elementary school-age softball player in the years after Bryan Stow’s injury and recovery. Our little league — and the city of Scotts Valley — was shocked that the father of one of our teammates was savagely beaten, walking from a sporting event. I couldn’t understand it at 10 years old, and I still can’t now.

How could something as seemingly serene as baseball polarize people such that somebody I knew almost died?

A month ago, I moved down to Los Angeles to attend UCLA. When I found out the Dodgers and Giants were playing — in the National League Division Series, no less! — I felt the same excitement any true fan would.

When my dad told me a few days later that he bought tickets and was driving down for the day so we could attend Game Four in Los Angeles along with my Los Angeles cousins, I was thrilled, but also filled with dread.

Even though I’m 19 and knew I’d be surrounded by my family and lots of male cousins, thinking about cheering for my team at the place where Brian Stow almost died filled me with some of that fear I felt as a child 10 years ago. 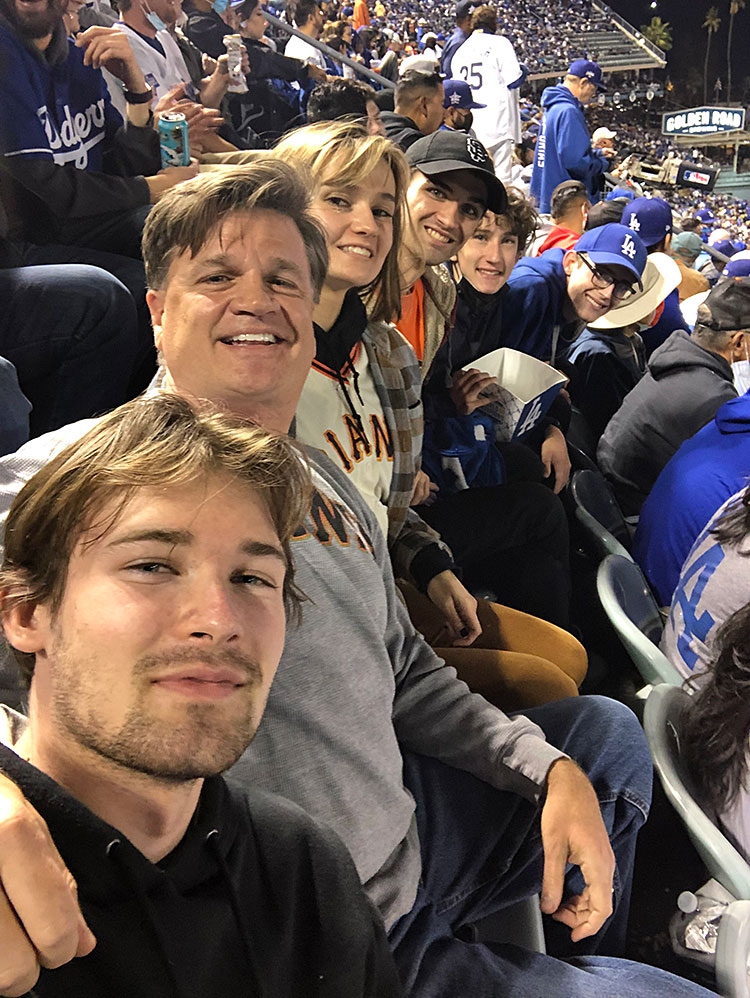 Willa Reed sits next to her dad Jim and her cousins at Dodger Stadium, where the Giants and Dodgers played for the National League Division crown. Before the game, she worried about her safety

Once I convinced myself that it was silly not to attend because of one incident a decade ago, I wondered if I would enjoy the game if I didn’t do what I always did: Wearing my Joe Panik Giants jersey and yelling my head off for my team.

I thought about how when I’ve attended Giants-Dodgers games in San Francisco. I always enjoyed making a point to drown out any Dodger cheers starting in the stands by initiating my own, “Let’s go Giants!” I always felt comfortable doing that at the Giants ballpark because I feel safe there, but would I at Dodger Stadium?

I went to the game and meekly wore my Giants jersey and cap, but what I felt in Dodger Stadium was different from what I expected.

I felt no hate. I felt no division or animosity. I only felt the electric feel of the ballpark, the excitement that only 55,000 fans strong could create.

That National League Division Series between the Dodgers and Giants ended up being one of the most fun weeks of my life. In my dorm hall, several of us huddled around a tiny computer screen watching every game, Giants and Dodgers fans alike. During that week, we became friends not because of the team we supported, but rather for the love of baseball we collectively shared. I discovered we could bond regardless of our affiliations over this shared passion. 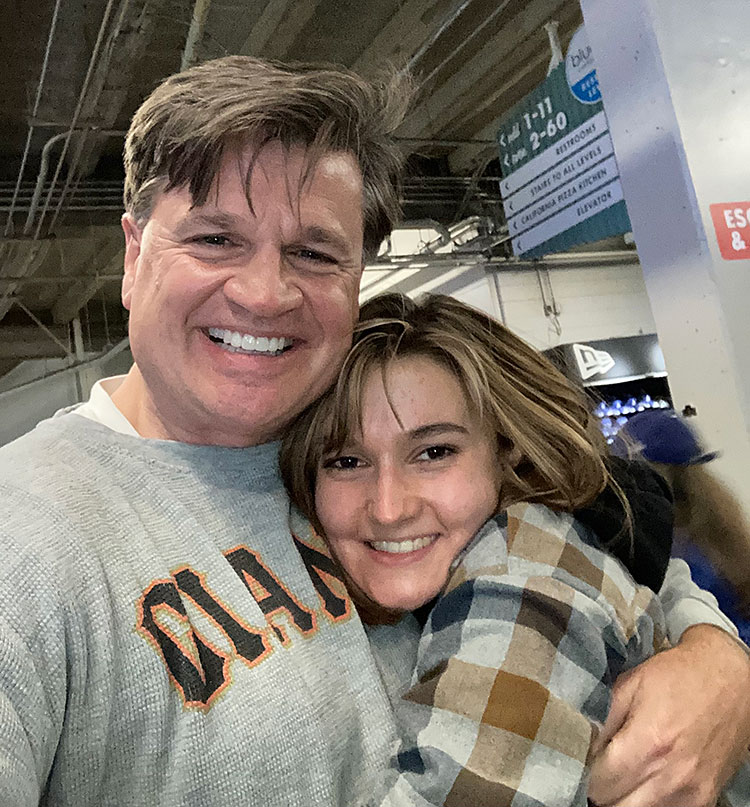 Willa Reed excitedly hugs her dad, Jim, as they prepare to watch the Giants at the Dodgers in the NLDS.

Even my cousin, a Los Angeles native who attended the game with me, said, “Going with Giants fans was fun, especially because of the banter between us. It made it a high-stakes game because the fans of the winning team would be able to trash talk on the ride home. Even if the Dodgers had lost, it still would have been fun … the experience of being in the ballpark, especially during a playoff game, and having great seats with some great people was an experience I’ll never forget.”

I felt that fun and friendly competition when we left Dodger Stadium after the game, walking the same parking lots where Brian Stow was attacked. My dad and brother and I were lightheartedly heckled by Dodger fans because the Giants lost — but I wasn’t afraid. It was friendly and jovial (some hilarious insults, I might add). We were all laughing and having the time of our lives.

Nobody truly cared who won or lost; it was about each other, the interactions fellow fans shared. It was about unity.

Sports have the capacity to lift up the world.

Track star Jesse Owens blew superior race theory out of the water and unified the world, winning four gold medals in the face of Adolf Hitler and the 1936 “Nazi” Olympics in Berlin. Jackie Robinson set the stage for black liberation in America by demonstrating his determination, breaking the color line on Major League Baseball in 1947. Home run king Babe Ruth, with his eminently quotable wisdom, inspired fans who saw him do what no others had done before and pointed out baseball is a team sport.

Today, Bryan Stow remains an avid baseball fan. He founded the Bryan Stow Foundation, whose online mission statement states that people should “live kinder lives.” Stow speaks at schools about bullying and fan violence. He serves as a symbol of bravery and joy, a reminder of the capacity sports have to change lives, to unify; the same unity that beamed from Dodger Stadium, that lit up the faces of fans of all sorts of affiliations.

Baseball is home. It elicits life’s goodness and pure togetherness, uplifting the world through pure fun and joy. In the world of sports, we are one.

Willa Reed, who graduated from Scotts Valley High School in 2021, is a freshman at UCLA. This is her first column for the Scotts Valley Times.

Willa Reed (right) with dad Jim center and brother Jimmy at left, outside Dodger Stadium share the joy of baseball.