Home Our TownAptos Into The Woods Is a Hit!
Aptos

Into The Woods Is a Hit! 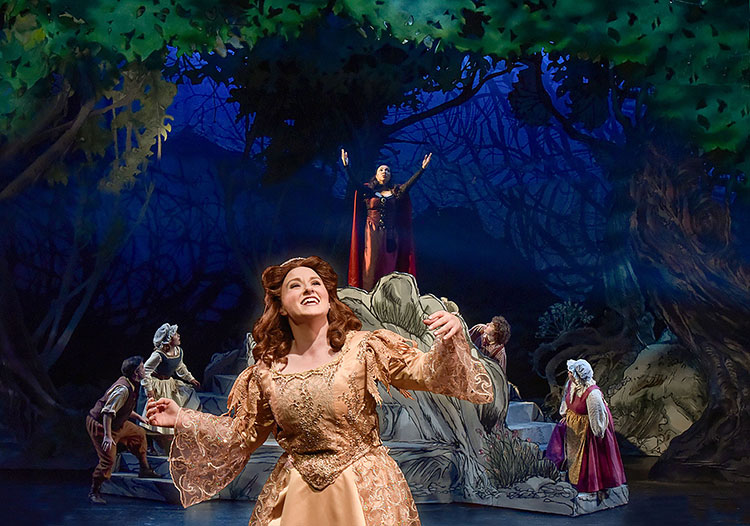 Some of the cast of Cabrillo Stage’s production of “Into the Woods”. Ashley Rae Little stars as Cinderella (center), while Kristen Hermosillo plays the Witch (back). Also shown (from left) is Ian Leonard as the Baker, Brittney Mignano as Little Red Riding Hood, Jackson Brivic as Jack and Alice Hughes as Jack’s Mother. • Photo Credit: Jana Marcus

Cabrillo Stage Summer Festival has produced its second hit of the season. First it was Beehive, The 60s Musical that had audiences dancing in the aisles, now it’s Into The Woods directed and choreographed by Janie Scott.

Into the Woods is a Tony-Awarding winning classic written by James Lapine and scored by legendary American composer/lyricist Stephen Sondheim. Stephen Sondheim is famous for his genius at matching words and music to dramatic theatre.

James Lapine is an American stage director and playwright. The orchestrations are by Jonathon Tunick.

The musical intertwines the plots of several Brothers Grimm and Charles Perrault fairy tales, exploring the consequences of the wishes and quests of our favorite storybook characters and brings them together for an enchanting musical.

The production staff needs its own round of applause. The scenic design, sound, lighting and costumes are incredible. Every detail is so meticulously crafted, right down to the buckles on Jack’s shoes or the sparkling gold beads on Cinderella’s gown. 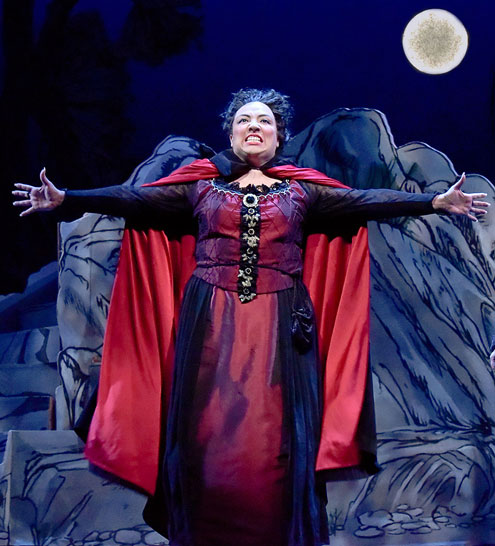 Every character is well defined with its own personality. I was expecting a performance from young college kids. I watched a play by professionals both on the stage and behind the scenes. A tremendous amount of work went into these productions and it shows beautifully.

Jackson Brivic is perfectly cast as Jack, with his cow, Milky White, played by Isai Centeno. They appear as if they were lifted off the pages of a fairytale. Jack’s mother, played by Alice Christine Hughes, who has been in several Cabrillo Stage productions, gives a stellar performance. Melissa Harrison, plays the Baker’s Wife, gave a funny and entertaining solo. At one point during the show, a lady behind me laughingly said, “Is this play rated PG?”

Musical and Vocal Director/Conductor Daniel Goldsmith’s brilliance shines in every song and within the singing voices of every actor. I was astounded at the powerful vocal range of the entire cast.

My favorite character in Into The Woods was the evil witch played by Kristen Hermosillo. She was so convincing I had to check the playbook to see if there were two actresses playing the part or just one. The funniest of all the characters, was Rapunzel’s Prince, played by Michael Stahl and Cinderella’s Prince, played by David Jackson.

This is the second hit of the season for Cabrillo Stage Summer Musical Festival. It will make you laugh, be surprised and you will never venture Into The Woods the same ever again.

Into the Woods runs through August 18 at the Cabrillo Crocker Theater, 6500 Soquel Drive in Aptos. Evening performances begin at 7:30 p.m., matinees at 2 p.m. Special Children’s Matinee at noon on Thursday, August 9 with backstage tours, orchestra demonstrations, meet & greet and photos with the cast! Purchase tickets online at www.cabrillostage.com or at the box office 831-479-6154