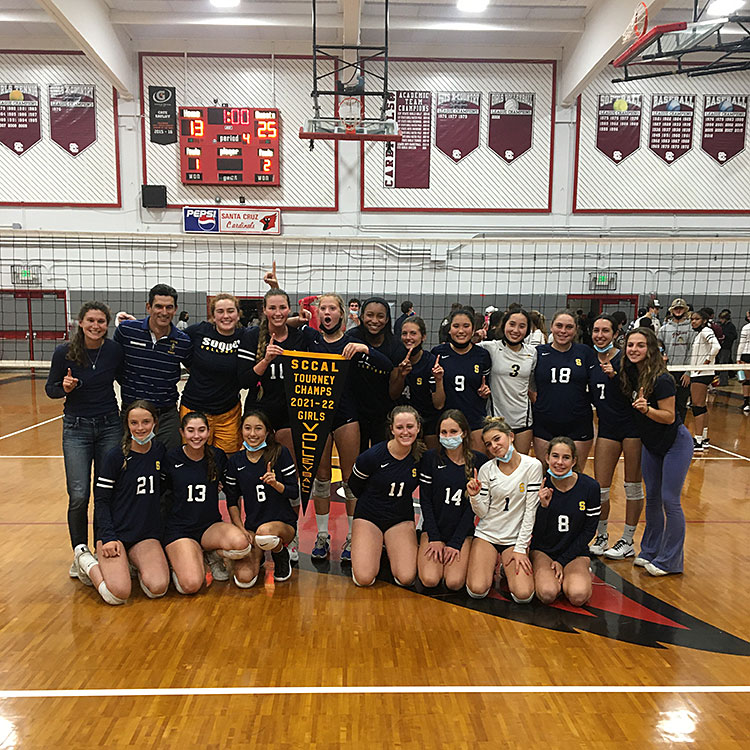 The 2021 Soquel High girls volleyball season has been one my teammates and I will cherish for the rest of our lives.

After missing a year of high school volleyball due to the COVID-19 pandemic, we were all incredibly eager to be back in our gym to work toward our goals once again. All season, the league championship and CCS have been our focus. We reached these goals due to our persistent hard work and grit, yet we would not be the team we are without our determination, our passion, our bond.

Under a new head coach, we were determined to make a change in our team dynamic from past years.

Stepping into the position, Coach Al Adamsen had a clear vision for how he wanted our team to function. From tryouts, the team philosophy he set is: “Attitude, focus, and effort.”

As captain, I took responsibility in creating a positive yet hard-working environment and culture for our team, and we have most definitely accomplished that. Being a part of a team that is as close as we are is a very special experience — one not many are fortunate enough to have.

We had a slow start.

With only a week of practice before our first match and key players injured, getting a consistent rhythm on the court was difficult. This was quickly remedied with more quality time in the gym and injured teammates returning.

Our first home league match against Santa Cruz High was a thriller. Five sets and we came up just a little short. Yes, the loss was difficult, but we were completely content with our play and knew in our hearts we would soon rectify that loss.

As the season went on, we improved as players and as teammates.

By the time our match at Santa Cruz High came around, we were determined and ready for the rematch.

Here we are again, at the fifth set. The score is 17-16 in Soquel’s favor and we have more adrenaline and passion coursing through our veins than ever. We won the match and are tied for first place in the league — both teams with one loss to each other.

We go on to win the rest of our matches in league play, putting us on top for the league championship title.

Then the league tournament. For the finals, you guessed it, Soquel vs. Santa Cruz. One last time.

Scheduled for our home gym, with hundreds of passionate Soquel students and fans expected to show up for the match, our school’s power went out.

The title game got moved to Santa Cruz High, which did have power.

We were disappointed, but we did not let that deter us from winning the tournament and beating our cross-town rival.

We took the league tournament championship by winning in four sets. It was exhilarating.

We now are seeded first in our division for CCS and have high hopes for the remainder of our season.

This season has been far and beyond anything I could have hoped for, and it is not over yet. Our success on and off the court has made this an unforgettable experience. I am forever grateful to Coach Al, my teammates, and our Soquel fans for making this season so special.

Ciara Cantlen #16 is a senior at Soquel High.

300 Wins for Randy “Coach B” Blankenship