Home Our State Lithuanians on Fire in Aromas!
Our StateWatsonville 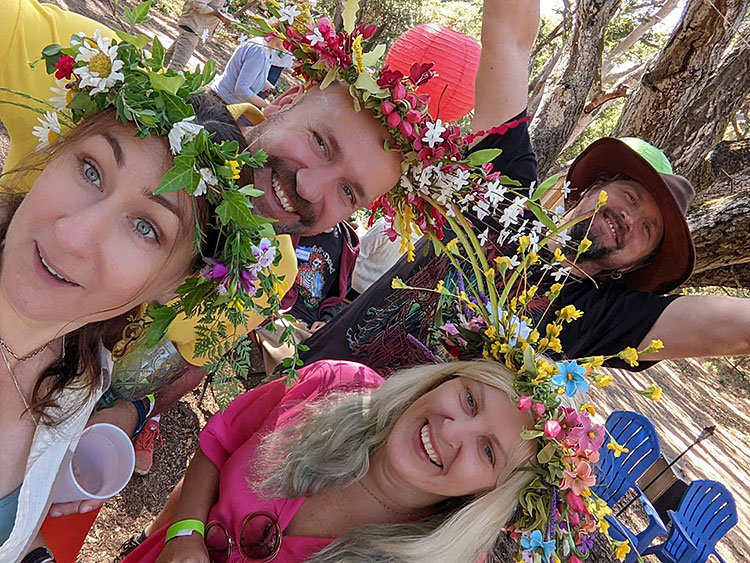 Among ancient oak trees on private property in Aromas, the Lithuanian language and peals of laughter echoed on the afternoon of Saturday, June 24. Red, yellow, and green Lithuanian flags fluttered throughout the campsite. The San Francisco Bay Area Lithuanian Community was celebrating its annual midsummer festival known as “Jonines” or, in English, St. John’s Festival. This is an ancient pre- 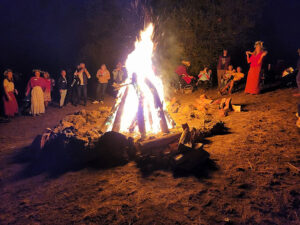 Christian celebration, which includes dancing around a bonfire, singing ancient folk songs and creating floral wreathes which traditionally, the women and girls wear on their heads but nowadays even the liberated menfolk willingly do so.

You may remember that the small Eastern European country of Lithuania was the first of the Baltic countries to declare itself free of the then-Soviet Union on March 11, 1990. Held captive since the end of World War II in 1945, the three Baltic countries, Lithuania, Latvia and Estonia had what came to be called the “Singing Revolution” and are now independent once again.

The San Francisco Bay Area Lithuanian Community did themselves proud as about 50 adults and a dozen or so kids got together from all over the S.F. Bay Area to celebrate this ancient summer festival.

Current Lithuanian popular music played on the loudspeaker for the young people (jaunimas) and adults to enjoy. The tables groaned with delicious food while people stood around getting acquainted and re-acquainted. Tents were set up for those who planned to camp (kemping) overnight. With a nod to American camping culture, s’mors (s’morzai) stations were set up and ready to go. 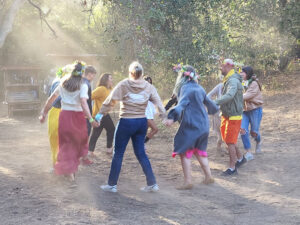 Two beautiful, charming pre-teens named Meile (Love) and Diamante (Diamond) were getting settled in their tent and explained how they came to be adopted a few years ago from their foster home in Lithuania. They now live in San Jose with their parents Renata and Dacijus. Asked what was different about life in the U.S. compared to Lithuania, Meile said there was more freedom but also more dangerous animals.

Her older sister Diamante said it was too hot and she did not like that but she liked that there were many horses here because she loves horses.

The San Francisco Bay Area Lithuanian Community has been in existence since 1952 and has about 600 or so members, according to its current president, Mindaugas Satis.

A desire to socialize with fellow Lithuanians, speak the language, and experience their homeland’s culture, was the impetus for World War II emigrants from Europe to create the organization in the San Francisco Bay Area as well as other cities in the U.S. and throughout the world where Lithuanians had emigrated.

Nowadays the members are young, highly-educated Lithuanians who have come to this area because of jobs in the technology industry and education. They all speak fluent English, Lithuanian and usually one or more languages. 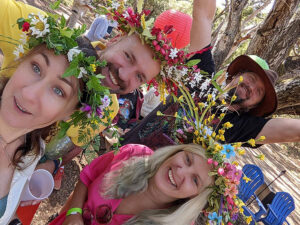 Did you know that Lithuania was the last European nation to accept Christianity? First Christianized in 1250-51, this christening did not stick as they stubbornly persisted in worshipping their pagan gods of nature. It was not until 1387 that the Grand Duke of Lithuania, Jogaila, married Queen Jadwiga of Poland that Christianity was fully accepted. As a condition of the marriage treaty, Jogaila and all of Lithuania had to become Roman Catholic.

Along with the new religion, the Lithuanians accepted the Roman Catholic saints’ days, one of which was St. John (Jonas, in Lithuanian) and as usually happens in circumstances like this, pagan customs were incorporated into religious ceremonies. Sometimes known as Midsummer Eve’s Festival, Jonines occurs

on June 24, the longest day and the shortest night of the year.

Lithuanian-Americans, while happy to be working and living in the United States and enjoying its benefits, want their children to learn their Lithuanian language, history, and culture. Most Lithuanian communities in the United States have churches, schools, cultural and benevolent organizations which they themselves support without any government assistance.

The S.F. Lithuanian Community opened their own Saturday school called “Genys” (woodpecker) in 2006.

The school has weekly Saturday classes in Castro Valley and has about 50 students. They learn to speak, read, write and sing in the Lithuanian language as well as Lithuanian history, geography, folk dances, folk songs and customs and culture. There are classes for adults as well.

For more information about the San Francisco Lithuanian Community and their school, Genys, please go to sflithuanians.com For Lithuanian worldwide news in English, please go to www.draugas.org. (Draugas means “friend.”)