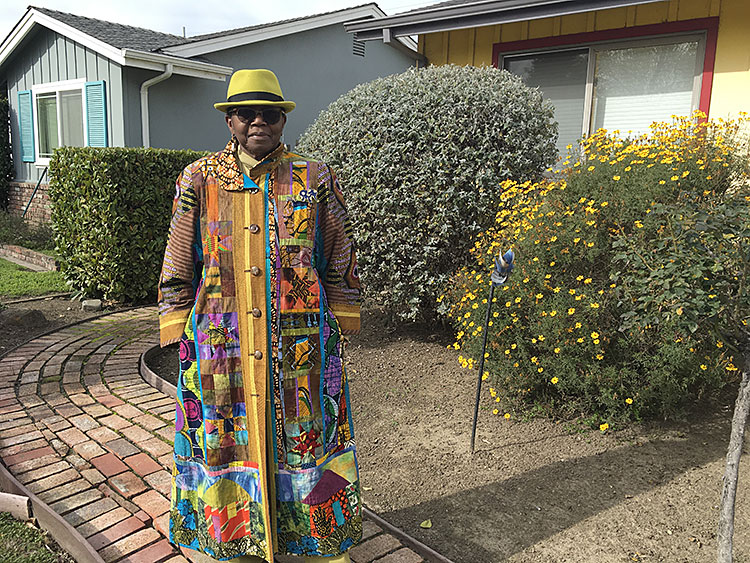 Story and Photos By Jondi Gumz

Once you’ve seen the beautifully vibrant one-of-a-kind coats created by Rachel Clark, your first question might be: Can I order one for me? 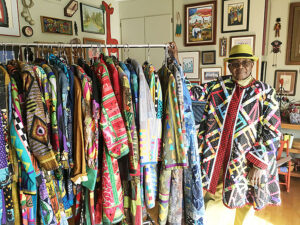 Sadly, not right now — because she has a book deal and a deadline to meet.

The next best option is to hear her talk about her life’s passion at the 2022 Pajaro Valley Quilt Association show, which returns to the Santa Cruz County fairgrounds Saturday and Sunday, Feb. 26-27, with the theme “Good Vibrations.”

Clark, the featured artist, will give a fashion show at 2 p.m. Saturday.

A longtime Watsonville resident, Clark had been packing suitcases full of her colorful coats, traveling and lecturing.

After Covid arrived two years ago, that stopped.

She learned how to give presentations with PowerPoint via Zoom, with her granddaughter Vittoria providing tech support. 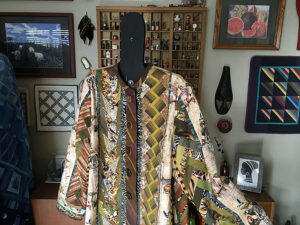 On Zoom, you don’t have the surprise of discovering Clark named each coat — a delightful name written into the garment.

Like “Just Another Colored Girl Having Too Much Fun.”

The pattern: A little girl sliding down a watermelon — and enjoying herself.

You may want to linger over a print pattern like watermelons — one of her favorites — or marvel at a silky-smooth lining or the vivid patterns. That’s possible only in person.

Ever the optimist, Clark looked on the bright side: She could showcase more pieces with PowerPoint, some of her favorites — like the blues — the ones she couldn’t fit in the suitcases.

Those who attend the show will see a collection that illustrates how her style has evolved — some inspired by African wax batik fabrics — ever more sophisticated.

Clark grew up in Tallulah, Louisiana.

She learned to quilt when she was young from the elders in her family.

One inspiration: Anna Williams Jones of Baton Rouge. An African American home-maker passionate about quilting, she started with fabric scraps to create masterpieces. She died in 2010 but Clark has her autograph pieced onto the back of a quilt hanging in her living room.

Another inspiration: Pulitzer Prize-winning poet Gwendolyn Brooks, who spoke at UC Santa Cruz some 30 years ago.

Clark still remembers her message: “Free to be me.”

She met her husband Gary in Los Angeles when they both worked in insurance; they married in 1968. He switched to teaching, special education, and two years later, his job brought them to Santa Cruz County.

In Watsonville, she was a stay-at-home mother to son Kincy, and she began sewing again.

She and Gary spent time in Germany. He taught in an American school. She learned to knit and crochet. Eventually she taught quilting.

Again, Clark looks on the bright side. Of course, she misses him but being a widow gave her time to devote to quilting and creating her coats of many colors.

She has taken classes, once finding she knew more than the instructor. When she took a class to learn a new technique, inevitably she would ask: What can I make with this?

Her granddaughter Vittoria is 18 and grandson Sanders is 17 but when they were young, “they were in my sewing room,” Clark said.

They learned about scissors, needles and pins — “none of it got put away,” she added.

For Clark, who is tall, her brilliant patterned coats over a monochrome gold top and pants give her a regal look. And she wears a fedora with ease.

As for the book, she said, “It was on my bucket list.”

With more years behind her than ahead of her, she wondered what to do with her elegant and eye-catching collection — and not burden for her son, who retired from the US Army as a lieutenant colonel after 28 years. (He’s now at a startup in San Francisco.)

She plans to donate some to the Dr. Martin Luther King Jr. Library at San Jose State University in San Jose where her work is part of an exhibit hosted by the Africana, Asian American, Chicano, and Native American Studies Center through March 19.

She wanted to share what she knows — thus the book proposal.

With it was accepted, “I was doing a happy dance to full-on panic,” she said.

Her expertise is in designing, she said, not writing, not photography.

Ever the optimist, she forges ahead. She’ll figure it out.

The 2022 Quilt Show will follow state guidelines requiring attendees over 18 to show proof of vaccination or pre-entry negative test for Covid-19. Fairgrounds security staff will check. Masks are required in indoors. Admission is $10. Hours are 10-5 Saturday and 10-4 Sunday.