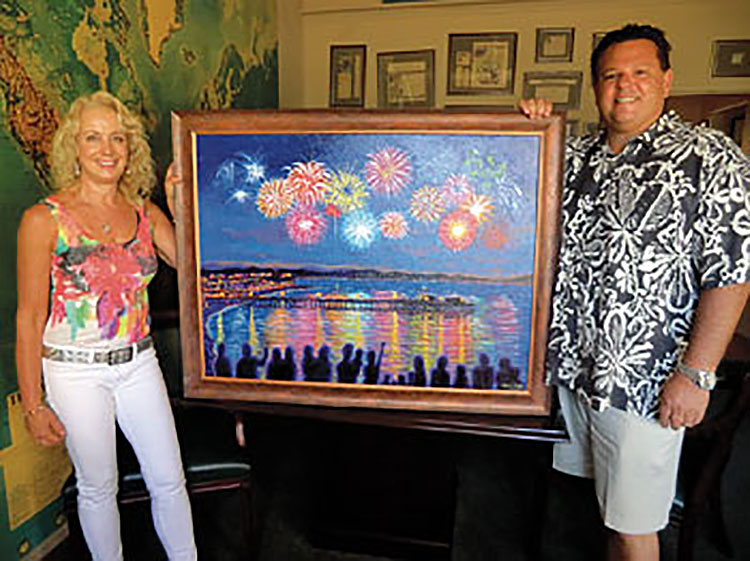 Lynne Jay and Marc Monte hold a painting of a past Monte Foundation Fireworks Extravaganza.

The Monte Foundation’s annual Firework Extravaganza will be celebrating its 25th Anniversary on Sunday, October 13 at 8 p.m. with an amazing display off the Capitola wharf that you will have to see to believe.

Dedicated to the children of Santa Cruz County, the Monte Foundation has been raising money for schools, sports fields, a family skate park and now the Capitola Library.

“It is hard to believe that twenty five years have passed since I started the Monte Foundation and came up with the thought of doing a fireworks show for our community while sitting on Capitola Beach having a beer with my best friend Doug Austin,” said Marc Monte, Director of The Monte Foundation.

It all began for the Monte Family when Marc’s dad, Rudolph (Rudy) Daniel Monte, and his mother, Doris Sylvia Monte, opened up two grocery stores together. Their first was Lady Fair Market in San Jose, which was named for Doris and her blond hair. She worked at that store for over 20 years doing the books, checking, and stocking groceries. 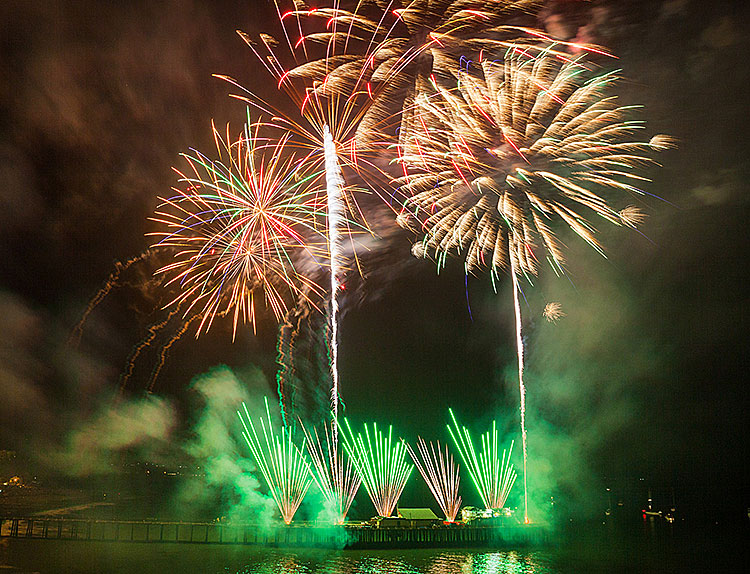 The store of their dreams, Deluxe Foods of Aptos, was opened in 1977. Once again, Doris was the head checker and worked in the office until she and Rudy retired. The success of that business allowed the family to eventually establish the Monte Foundation. It was a coming together of two generations to make a difference in our community.

According to Marc, the Rudolph Monte Foundation is named after his late grandfather and Deluxe Foods of Aptos is the cornerstone of the Monte family generosity.

In 1996, The Monte Foundation made history with the Fireworks Extravaganza, the first-ever countywide school fundraiser.

“So many shows, lighting up the sky and bringing smiles to children and parents alike from all over the county,” Marc said. “The millions raised has gone to so many schools, teams, fields, score boards, skate board parks, libraries, hospitals, SPCA — the list goes on and on. I appreciate all the help I have received from the business community, the police, firemen, State of California, City of Capitola, and all the volunteers over the years.”

So pack a snack, bring your beach or camping chair, bring a friend and/or your family and head for Capitola Beach, the wharf, or the bluffs surrounding Capitola by the Sea and enjoy the wonder, awe and majesty of the Monte Foundation Fireworks Extravaganza in Capitola on Sunday, October 13 at 8 p.m.

“The Lord has truly blessed our business Deluxe Foods of Aptos and the Rudolph F Monte Foundation and I am thankful for that as well,” Marc said. “Lighting up what can be a dark world sometimes, is a wonderful thing.”

Twilight Concerts Are Back!

Wednesday Night Concerts Are Back!