When the Marks family donated 9,000 acres in Aptos in 1963 to the state for citizens to enjoy the land in perpetuity, the agreement restricted use to camping, nature study, hiking and associated activities — and required adequate standards for public health and safety to be maintained. 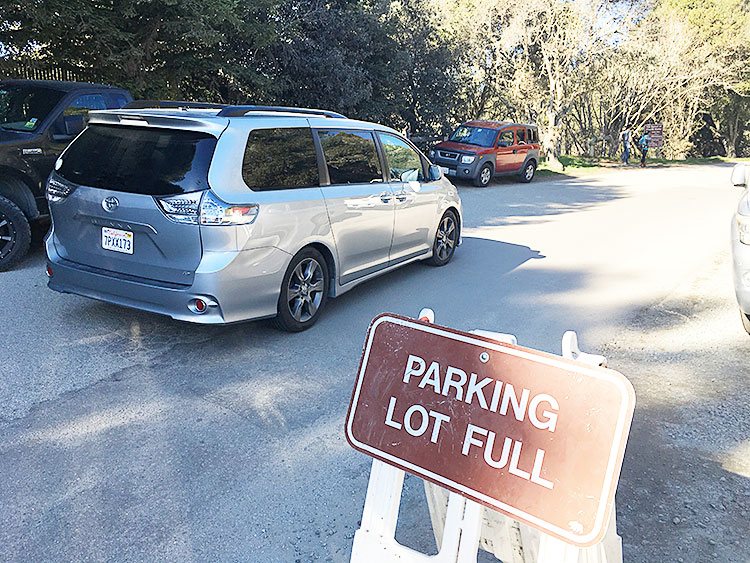 Today, the Forest of Nisene Marks is so beloved, the road to reach the kiosk entrance station is lined by cars and overrun by visitors — people walking, people cycling, people walking dogs.

Couples and families saunter into the woods on Aptos Creek Road — a one-lane road that is curving and narrow with no pedestrian path for safety — as cars and SUVs line up behind them, and sometimes drivers impatiently pull around people on foot only to get to the entrance station where they learn all the spaces in the parking lot (70 in winter, 80 in summer) are taken and they must turn around and exit.

Anyone visiting the park via car has no idea the parking lot is full until they’ve driven a mile on the narrow road to the kiosk. There’s no advance warning.

On a sunny weekend, there’s no space to park outside the park, either. Vehicles are jammed along the side of Aptos Creek Road every which way, next to Epicenter Cycling and a temporary dirt lot next to Swenson’s Aptos Village construction project is full, too. Parking is less available since a connector road to Granite Way was closed as part of that project and turned into a walking path.

Worst of all, on the afternoon of Dec. 27, when three people administered CPR to a man who had collapsed in the park, a possible heart attack — a time when seconds save lives — the ambulance faced one obstruction after another as pedestrians failed to follow state law and yield right-of-way despite flashing red lights signaling an emergency. 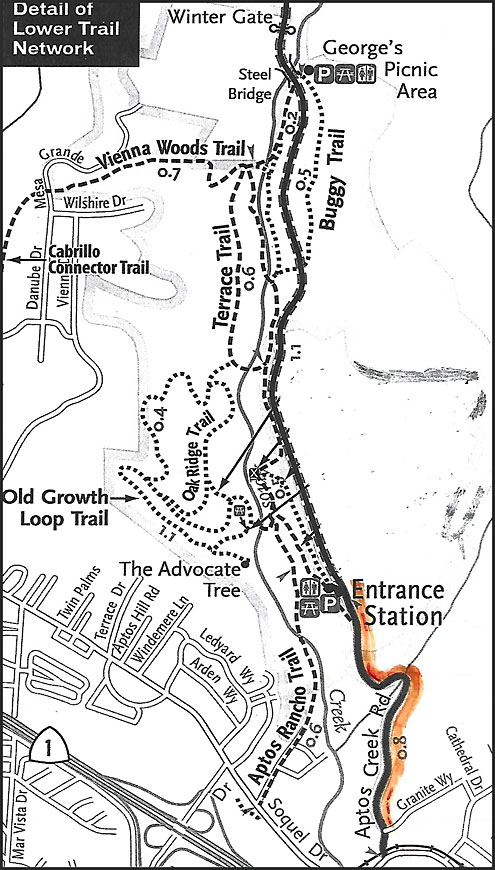 Patrice Edwards, publisher of the Aptos Times, saw the ambulance unable to move, blocked in both directions on the narrow road just beyond Mangels Creek Bridge — where county property ends and state park property begins — as a state parks staffer had stopped all traffic. Incoming motorists were turning around with bicyclists and walkers traversing all over the roadway. She took videos to show the problems were life-or-death serious — and to call for solutions.

Eventually, parks staff allowed outgoing traffic, freeing a lane for the ambulance to enter into the park. Fortunately, although first responders were delayed, the man’s life was saved, according to State Parks Sgt. Joe Walters, supervising ranger.

Aptos resident Becky Steinbruner, who lives next to the park, took up the cause after the CPR incident.

Most times, Aptos La/Selva Fire gets to a 911 call in the state park first because the station is the closest, but Cal Fire responded to calls in Nisene Marks 19 times last year, 17 being medical. Nate Armstrong of Cal Fire said none involved traffic delays or a detrimental outcome.

But Brenner, the EMS administrator, said there are delays in response to calls in the park due to pedestrians on Aptos Creek Road. She’s discussed this with AMR ambulance staff.

This year, more than once, ambulances have been called into Nisene Marks State Park for medical emergencies, and people on foot have just kept walking, ignoring the flashing red lights.

Adding to the congestion is the 49-unit Village Creek townhome complex was built in 1990 on Village Creek Road, a one-way street feeding into Aptos Creek Road — providing much-needed housing in a desirable location with walking distance to Nisene Marks, but also bringing more traffic to a road never designed to handle it. 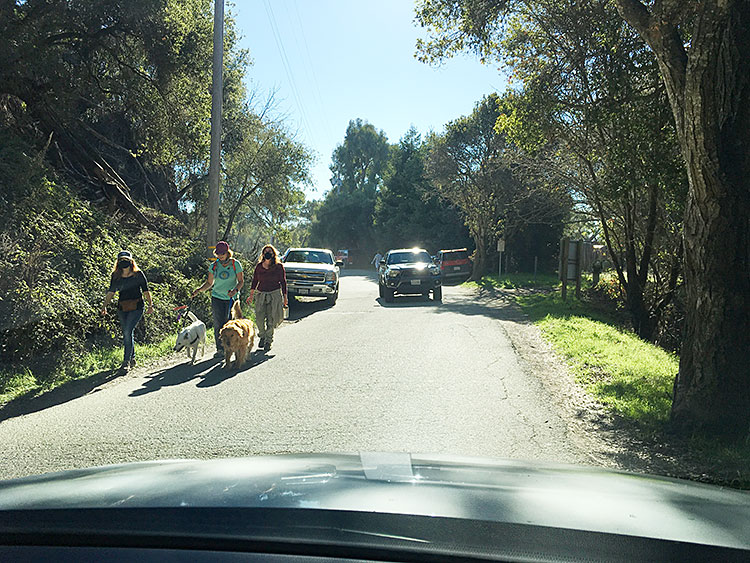 Historically, the narrow dirt road was created for the Loma Prieta Lumber Co. to access the forest and operate a mill at the headwaters. The gentle grade of the road today is evidence of the standard-gauge railroad that once entered the canyon during the logging era.

Al Hughes is one of the homeowners living on private property with acreage on west side of Aptos Creek Road two miles past the kiosk. About 50 people own property in the park, half on the west side of the road and half on the east.

Hughes’ property and that of his neighbors was never acquired by the state. Similarly, the state has a right-of-way for Aptos Creek Road but doesn’t own all the property the road exists on.

For Hughes, illegally parked cars have created a dangerously constricted road — an accident waiting to happen.

“Every day, they risk their lives to go in and out of their deeded access,” Edwards said.

Hughes suggests that when the park’s parking lot capacity is full, park staff put up a sign before the Steel Bridge saying “Residents Only Beyond This Point” so people don’t try to turn around later at the Winter Gate, where they frequently end up in the ditch.

His wife Bella noted the 1989 earthquake put Nisene Marks on the map, as it was the epicenter of that temblor, but with COVID-19 restricting indoor activities and December stay-at-home order, the number of vehicles, bicyclists and walkers at the park has quadrupled.

With Epicenter Cycling at the foot of Aptos Creek Road since 2009, the one-lane road is promoted by mountain bikers as a “legal” and “pretty” trail for aficionados.

The 2005 master plan for Nisene Marks calls for a visitor center and a parking lot near the kiosk and the Emmett Reed picnic area, and identifies five more locations — the Dedication Tree, the West Trailhead, and the Mary Easton, George’s and Porter picnic areas — where a total of 66 to 95 parking spaces could be added, improving access for people with disabilities.

Spaces were added in the Porter area, but not in the others.

“Funding and timing are an issue,” said local historian John Hibble, who’s with the Aptos Chamber of Commerce.

Among the remedies proposed by residents: Ticketing cars parked illegally, posting warning signs about parking fines in areas where it is illegal to park, and assigning state park staff near the mailboxes with radio communication to the entrance station to restrict parking to the capacity of the lot. 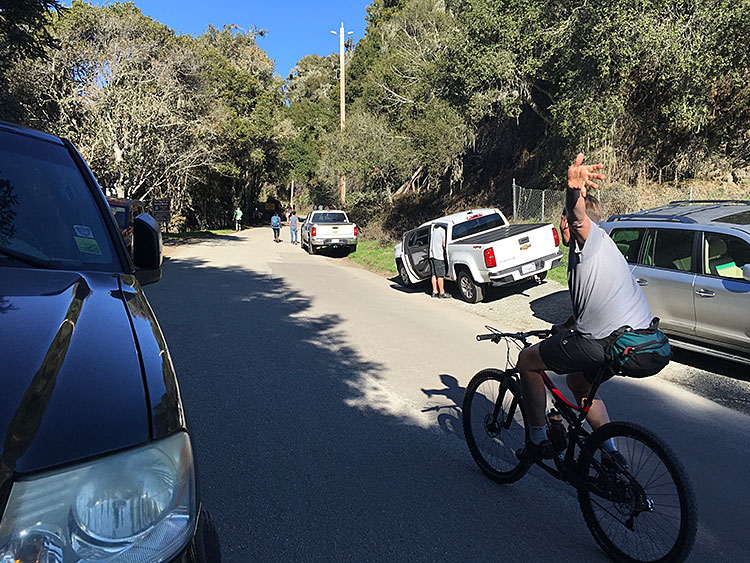 It was agreed that ticketing cars parked illegally would discourage people from doing so.

State Parks has hired four new officers with enforcement ability and have increased patrols inside Nisene Marks, according to Walters.

Parking tickets issued by State Parks rangers bear a fine of $51.50 to $96.50, depending on the violation, according to Gabe McKenna, public safety superintendent for State Parks, and the penalty rises as processing fees are added on.

Asked if State Parks plans to add parking, Walters said 10 spaces were added in 2019, but no other expansion is planned.

Al Hughes suggested people park at the Aptos Village County Park, which has about 26 spaces. It’s not clear whether county park staff would approve.

Another idea was to move the park entrance station closer to Aptos Village to address the hazardous illegal parking on the road. 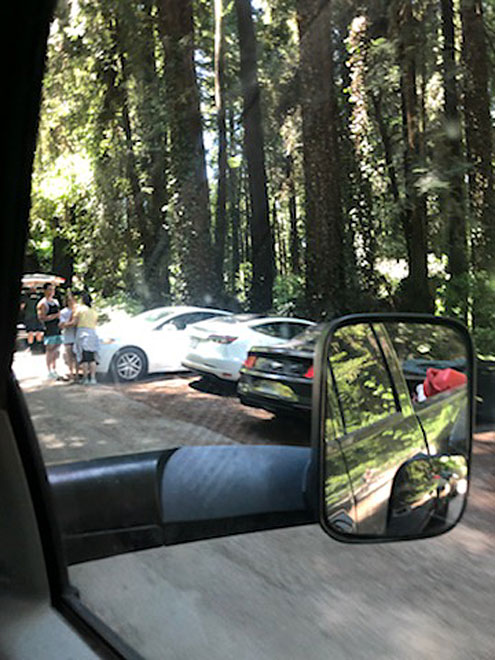 Steinbruner looked up the conditions of approval for the Aptos Village project, approved by county supervisors in 2012, in which the Swenson development company agreed to provide new entry signage and a kiosk for Forest of Nisene State Parks. The design details are to be approved by State Parks: http://www.scco planning.com/Portals/2/County/Planning/env/063.pdf?ver=t6XR52ZLmBGugVMOszVcjw%3d%3d

It seems the Aptos Village Project developers could be of real assistance in moving the kiosk closer to the Village, as was agreed would be the best solution to control crowding and hazardous illegal parking along the roadway, Steinbruner concluded.

Walters also agreed to: Look into restoring the payphone service at the Steel Bridge for emergency use, work with the sheriff to address the illegal campers along Aptos Village Way and in the dirt parking lot, ask the State Parks Roads & Maintenance Division about plans to fill potholes and improve road edges for safety turnouts.

Aptos Creek Road actually is in two jurisdictions, Santa Cruz County and State Parks. There’s no marker on the road to indicate where the jurisdiction changes, so Walters agreed to find out. That would help clarify where the county Public Works Department is responsible for repairs.

Hughes raised the issue of old trees potentially falling on the road, and Walters agreed to ask the State Parks’ Resource Division to assess whether any trees along the road are hazardous and should be removed.

Walters agreed to host a virtual follow-up meeting in February to report back and discuss safety solutions.

The 2005 State Parks master plan notes that since the Marks family donated the land, the county population has tripled. 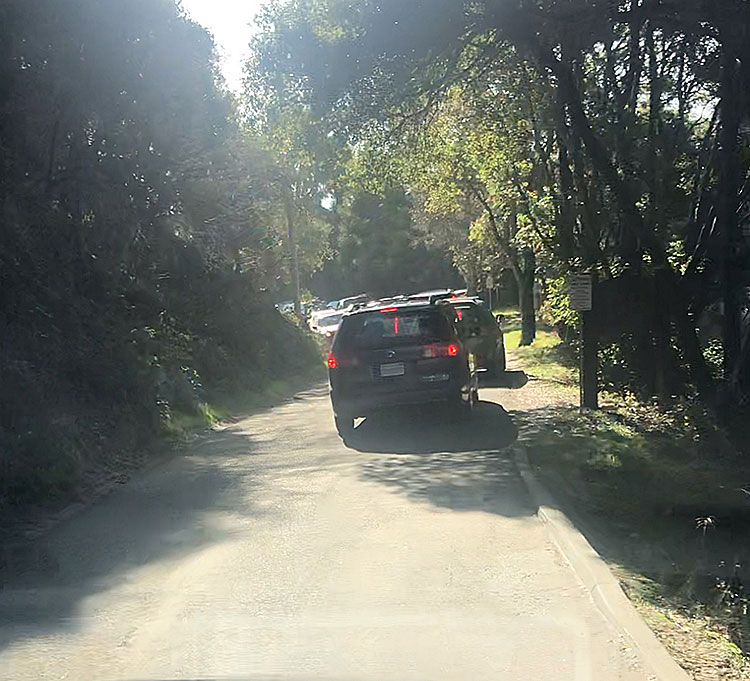 It also point out the location on Aptos Creek Road next to Aptos Village and a future development (which is not quite finished), saying, “The entrance at Soquel Drive, signage, and parking solutions remain issues for the Department in this area.”

Nisene Marks is not the only park suffering from unchecked tourism.

In 2019, Yosemite National Park began limiting entry at Wawona Road because of feces and trash on the side of the road after two campgrounds closed. Joshua Tree National Park closed campgrounds when bathrooms were at capacity and Death Valley, strained by overused outhouses, got help when a nonprofit donated money to reopen the Furnace Creek Visitor Center.

If the Marks family could see this situation now, what would they expect to be done to maintain public health and safety?

Next time: Progress on solutions.