Aptos residents worried about illegally parked cars on the road for Nisene Marks State Park creating safety hazards for locals and visitors have learned two possible solutions they suggested have been ruled out. But one new idea, using technology such as an automated sign system, will be explored. 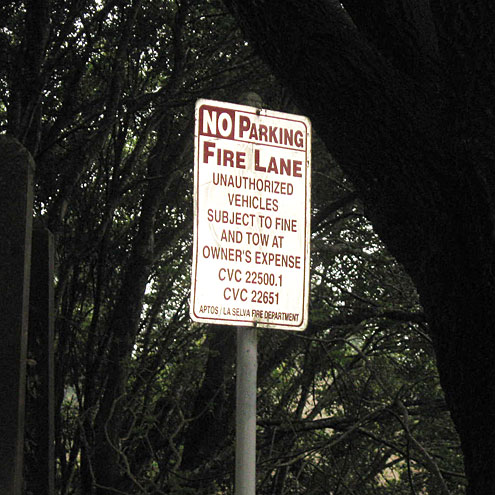 The 10,000-acre park, created in 1963 from one-time logging property, has proven wildly popular during the COVID-19 pandemic, attracting people arriving in cars, on foot and bicycles to enjoy the outdoors. But a safe pedestrian path has never been built, and neither have the parking lots or visitor center recommended in the 2005 master plan. Visitors park vehicles illegally, crowding Aptos Creek Road, which is one lane — narrow and curvy — resulting in close calls when the ambulance is delayed in reaching 911 medical emergencies.

On weekends, homeowners such as Al and Bella Hughes and Aptos Times publisher Patrice Edwards, whose private property is in the park, never acquired by the state, navigate a treacherous situation on the road, meeting strolling visitors and cyclists around blind curves.

At a Feb. 11 Zoom meeting with concerned residents, State Parks Sgt. Joe Walters, supervising ranger, said the Nisene Marks’ manned kiosk won’t be moved to what residents hoped would be a safer location, preventing more cars from entering when the park’s 138 parking spaces are full. (In January, he had estimated the park had 70-80 spaces.)

Walters also said posting a seasonal staffer to direct traffic on the road where the “Parking Lot Full” sandwich board sign is set out would be too risky because employees are not trained in traffic control. 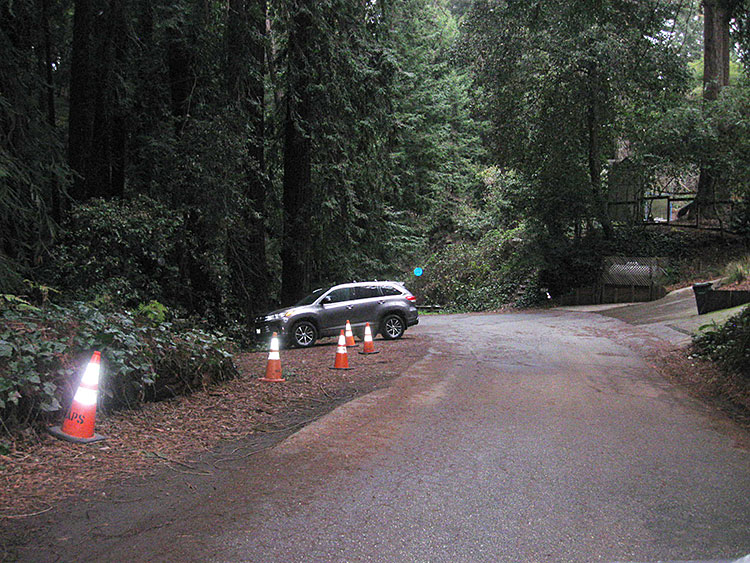 Todd Marco, who moved with his family to Aptos Creek Road in July, read about the problems at the park in the Aptos Times.

“I have a lot on my plate,” Walters said. “If you want to take that on, fantastic.”

Marco also suggested people could go to park entry points other than the main entrance, but the downside would be cars and traffic in those neighborhoods such as Vienna Woods.

Another idea he had was to create a foot path from the Aptos Village county park, which has 28 spaces and could provide overflow when the Nisene Marks parking is full.

“Not a bad thought,” said Walters, noting some of the land between the two parks is private property.

To help residents on the road, Walters is working on a resident placard system, similar to the one for Seacliff Beach residents, which has worked well.

Al Hughes asked if signs could be put up, saying, “Parking Lot Full. Residents only.”

He envisioned putting up two signs, if funding is provided by the Friends of Santa Cruz State Parks.

Typically, that nonprofit provides some funding to State Parks from its fundraisers. Walters wasn’t sure how much, but he knew fundraising events were halted due to the pandemic, likely leaving the Friends with a budget shortfall.

The benefit of working with the Friends, Walters said, is that nonprofit can use a commercial sign company to make the sign more quickly than if State Parks were to purchase one through the standard process, in which signs are made by prison inmates, taking months to get done.

Walters said he would report back on whether there could be two “Parking Lot Full. Residents Only” signs installed, one at the mailbox cluster and the other at the Steel Bridge.

Swenson, the developer building the new Aptos Village townhomes and stores adjacent to Nisene Marks, agreed as a condition of approval to pay for entry signs and a kiosk for the park — which appeared to be a solution — but Walters said the agreed-to kiosk was merely informational, not big enough to accommodate a park staffer.

What about asking Swenson for a larger kiosk at the entry area? asked Aptos resident Becky Steinbruner.

Walters agreed to broach the question with State Parks land agent who handles such matters, and Edwards suggested a Swenson representative be invited to the next meeting a month from now.

One sign of progress on safety is that orange and white cones have been placed in the Mangels Creek bridge area, deterring many from parking there illegally.

“It’s a huge improvement,” said Edwards, a resident on Aptos Creek Road in the park. “People aren’t even attempting to park. It’s working to keep the area clear.”

Ticketing cars was proposed in January as one strategy, and Marco, the new resident, liked the idea, predicting that a sign saying “towed at owner’s expense would be pretty effective.”

State Parks has four new rangers but none is assigned to Nisene Marks. Two are assigned to Wilder Ranch State Park, one to Seacliff State Beach, and one to Sunset State Beach.

Walters said he would ask about enforcement at Nisene Marks.

Asked how many tickets were issued last year, Walters said he knew of 37 cases for various violations and would look up the parking ticket numbers.

As for the out-of-order AT&T pay phone at the Steel Bridge, Walters said there’s no cell phone service in the area, making the pay phone a necessity for public safety. He’s already started a repair ticket with AT&T.

Another issue, illegal camping in the dirt parking lot next to the Aptos Village Project Phase 2, was addressed with Walters discussing it with Sheriff Sgt. Jordan Brownlee, who reported the campers are now gone.

The road is under two jurisdictions, with the county responsible up to Mangels Gulch, and state parks is responsible for the rest.

Another idea was to create “fire lanes” in the park to help emergency vehicles get to calls faster.

Central Fire Marshal Mike DeMars said he is working with an officer at State Parks to install fire lane parking restriction signs in the county road area where there were red curbs in the past.

Residents bemoaned the pothole hazards on Aptos Creek Road and erosion of the road into the creek.

“The minute you look down to avoid a pothole, you put yourself at risk of hitting someone,” Edwards said.

Steinbruner observed two piles of road base and drain rock in the park and hoped they could be put to use.

Asked how much money is needed to fix the road, Walters said he would research that.

But he also pointed out the time to fix the road is in April or May, not when rain is still coming.

“An atmospheric river could flood the potholes and we’d lose all that rock,” he said, adding that resources are going Big Basin and Butano state parks because they were so badly damaged by the CZU lightning fires.

Entry fees for the park go to State Parks’ general fund, so that money isn’t available to fill potholes.

Marco said his 6-year-old daughter and 3-year-old son have been running a snack stand and donating the money to Housing Matters, a local nonprofit.

Maybe they could raise awareness, he suggested.

“Put up a sign: Fill the potholes,” said Steinbruner.

Al Hughes suggested grading the road, as was done in years past, rather than filling potholes. He said he had seen several State Parks graders at Rio del Mar Beach parking lot, seemingly available.

Walters said he would look into that.

“I feel like there has been progress, but I think there’s a long way to go,” Edwards said.