Story and Photos By Jondi Gumz

The seats are here, 264 from Bellagio Casino & Hotel in Las Vegas. The stage is here, purchased from Arizona State University theater. The lights are here, ready to be moved into position for a theatrical show. And the folks who started working in 2013 to turn the empty space next to the Scotts Valley Library into a Performing Arts Center expect to see the fruits of their labor this year.

“We want to do major performances in the winter,” said Larry Smith, current president of the Scotts Valley Community Theater Guild.

“We are just getting around to thinking we can schedule,” said Trish Melehan, Guild board member and longtime supporter, noting Scotts Valley High School drama teacher Kendra Kannegaard is on the board. 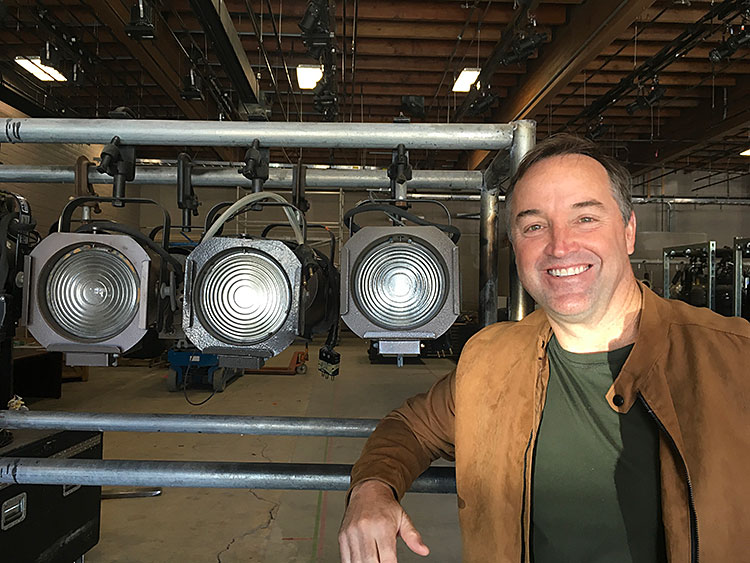 Larry Smith, president of the Scotts Valley Community Theater Guild board, is eager to put the stage lights to use.

The timing is good as the COVID-19 case rate has plummeted and the county appears posed to move into the state’s Yellow Tier, the least restrictive, with the state opening up fully June 15 if current trends continue.

Smith is most enthusiastic about the flexibility of the space, which can be partitioned into smaller spaces in each corner with black drapes creating privacy for multiple activities to take place at one time. Two technical booths are available to deliver professional sound and lighting.

“We’re a few weeks away from having a functional performing arts center,” Smith said.

A fire alarm system must be installed, and ducting for rooftop air conditioning units.

The Guild expects the City Council to visit at the end of May. The council supported the performing arts center as an economic booster, bringing people to dine and shop, and as a much-needed venue to promote the arts in the city.

Guild leaders are coordinating their project with the city, which is planning to renovate the library. The renovation will include a new façade for the former roller rink building. The library construction may start in August and wrap up in January. 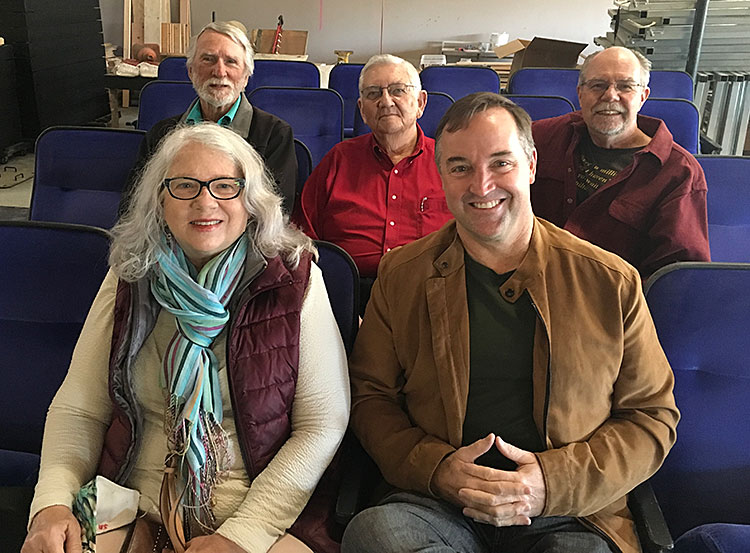 With all of the interior space devoted to theatrical use, the Guild needs to raise $50,000 to $80,000 to pay for ADA-compliant outdoor bathrooms — “nice bathrooms, like Santa Cruz Shakespeare uses at DeLaveaga Park, not your basic Porta-Potties.”

The Guild has nicknamed the space “The Temporary” because they still envision the space evolving into an all new state of the art theater with real walls, an orchestra pit, and brand new fixtures. But the space as created will serve the needs of the community for some time to come.

The Guild has already raised hundreds of thousands of dollars from grants and individual donations and is honoring donors on its website: www.svctheaterguild.org. They will place a permanent testament to donors inside the site upon opening to the public.

But if you could never fall in one of those categories, you can still be listed as an “Inaugural Supporter” with a donation of $500, or be one of the 100 “Founders” with a donation of $1,500. If you work at a company that matches employee donations to a nonprofit, that can double your gift.

As the Guild’s website puts it, donations in any amount are gratefully accepted. If donating by check, make the check payable to: SVC Theater Guild, P. O. Box 66438, Scotts Valley, CA 95067-6438.

Back on Campus in Scotts Valley

Businesses In Burn Zone Get Grants