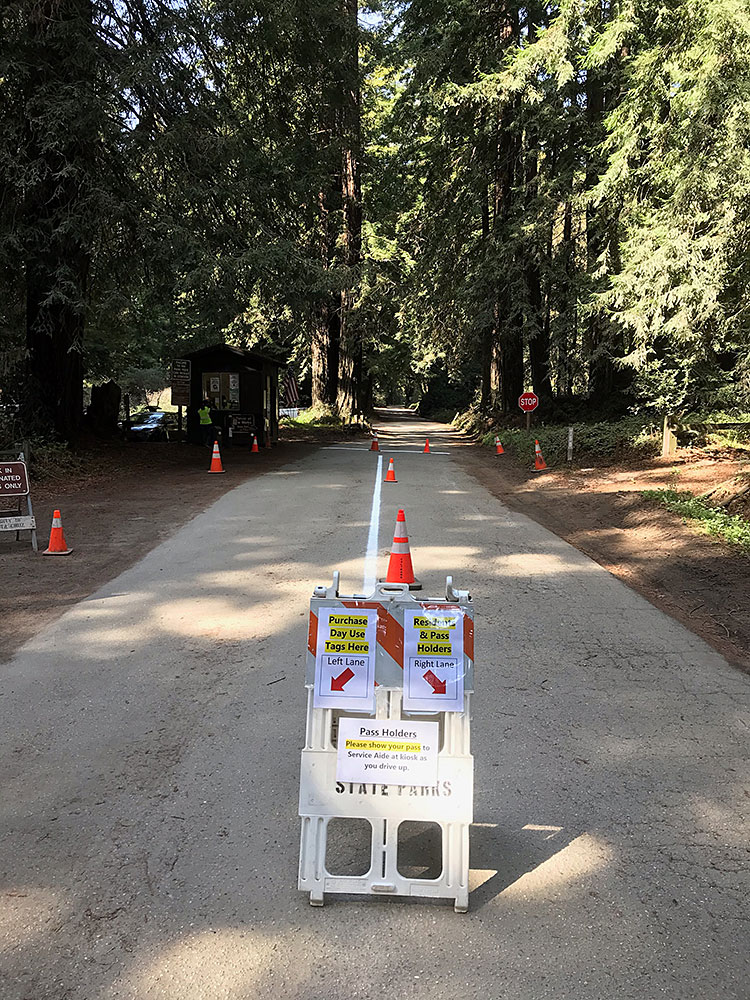 On March 3, State Parks staff moved the kiosk station at the entrance to the left, creating two lanes of traffic. One is for visitors in cars paying the entry fee and the other for Golden Poppy Pass holders and residents who live on Aptos Creek Road on property never acquired by the state and face an unsafe gauntlet of park visitors — cars, cyclists and people on foot — every time they go out for work or errands and return.

About 50 homes are inside the park. If three people per household drive, that that means 600 trips a day on a one-lane road where car, foot and cyclist traffic has increased dramatically in the past year due to COVID-19 restrictions and recommendations to take advantage of recreation outdoors where the contagious coronavirus is less likely to spread.

“We have to look at the safety of the residents,” said Patrice Edwards, publisher of the Aptos Times. “When we want to walk down to get ice cream, we’re competing with cars and cyclists.”

Everyone who visits Nisene Marks, which was created in 1963, is jammed onto Aptos Creek Road because there is no walking path and no bike lane. The former logging road, lacking curbs, guardrails and drainage in steep wooded terrain, is eroding.

Parking lots recommended in the 2005 master plan have not been built, so visitors have parked willy-nilly along Aptos Creek Road, making it even more narrow and hazardous — and difficult for an ambulance to respond to medical emergency calls — but ticketing for illegal parking has been scanty.

First the state place orange cones to designate “no parking” areas. Then a “no parking” sign went up. Next, the manned kiosk station was moved four to five feet, creating two lanes, which Walters hoped would improve traffic flow, as at Sunset State Beach.

The reaction from residents: “This is excellent” and “fantastic.” One felt it would increase sales of the Poppy pass, which costs $125 a year and allows free entry into more than 100 parks.

Walters said he is working with Central Fire Marshall Mike DeMars to get “no parking fire lane” signs installed on Aptos Creek Road near a cluster of resident mailboxes where visitors often park, creating congestion.

Another improvement on the horizon is ADA — Americans with Disabilities Act — access to the bathrooms at the kiosk station and an ADA parking area. Walters said the project was approved in 2016 and is now going out to bid.

As for road erosion, he said he got a bid of $10,000 to grade the dirt portion of Aptos Creek Road, requested by resident Al Hughes. He is working with the Advocates of Nisene Marks, Save the Redwoods League, and Friends of Santa Cruz State Parks to secure money for this grading.

Peg Danielson, operations director at Friends of Santa Cruz State Parks, said money can be donated and earmarked 100 percent for this project.

Since the August CZU lightning fire, which burned 86,500 acres and closed Big Basin and Butano State Parks, the focus of state parks donations has been on fire recovery, Walters said, which is why he is reaching out to nonprofits for help.

“That’s definitely doable,” said Walters, who is working on designing a new sign and getting a cost estimate.

People wanting to visit the park might ignore the sign, “but it’s a good first step,” said resident Todd Marco, who had offered to investigate the feasibility of an electronic sign.

Digital signage is more expensive so he suggested a radio signal from the station kiosk manned by seasonal staff hired by Friends of Santa Cruz State Parks to a planned non-manned entrance kiosk to alert visitors when parking lots are full.

That kiosk is to be installed by Swenson, which built the first phase of the Aptos Village development, after completing the second phase — seven multi-use buildings — which is to start this summer.

“We’re open to this radio signal concept,” said Jessie Bristow, project manager with Swenson. “We’re definitely willing to work with everyone … we want to avoid putting a burden on anyone.”

Edwards said Verizon cell phone service is functional at the manned kiosk but Walters said the kiosk has no power and no cell phone reception, which could be problematic for creating a digital alert system.

Ticketing vehicles for illegally parking is another challenge. Walters said enforcement rangers rove from one park to another, rather than staying within a park. The seasonal staff working in the station kiosk are not sworn officers and cannot issue citations, he explained.

Marco proposed a resident parking placard system at Mangels Gulch for himself and his neighbor who find their parking spaces taken by park visitors. Walters said he would talk about it with them later.

Marco has started a private Facebook group called “The Gateway to Nisene Marks,” which has more than 100 members, to share ideas to make the forest safe and enjoyable for all.

His latest idea is to create a new trail, which he calls the “Nisene Gateway Improvement Project,” to reduce foot and bike traffic on Aptos Creek Road as a way of addressing park access and public safety issues. For this initiative, he has started a Google group and outreach to the community, such as Shared Adventures, a nonprofit supports ADA access projects.

Edwards asked if the bridge over Mangels Gulch could be resurrected to eliminate a double-blind hairpin turn on Aptos Creek Road. A trestle bridge over Mangels Gulch was built for the logging railroad, which operated in the 1880s, and then converted to automobile use in the late 1930s, provided an alternate route for residents before the land was given to the state in 1963. The bridge is no longer in use, apparently because it needed costly repairs.

One spot park visitors considered “free parking,” a dirt lot owned by Swenson next to the Aptos Village development, is fenced off and no longer available.

With no one monitoring, a man living in a vehicle moved in and was fixing cars and it took two months to evict him, Bristow said.

He said five public parking spaces will be created along Aptos Creek Road and a sidewalk will be installed on the north lot of phase two.

The fenced-off lot is to be given to the county as a parklet upon completion of construction but it’s currently Swenson property.

Edwards asked about Aptos Village Way, which is easily congested when large vehicles park on the side, forcing drivers to cross the yellow center lines.

Bristow said Aptos Village Way is privately maintained and was designed to be narrow to make people slow down — “traffic calming” — but wide enough for fire engines.

“At this time I don’t have a solution for you,” he said.

Marco noted a “severe shortage of parking” for businesses in that area.

“Before removing parking, we’d have to have plans to put parking somewhere,” he said.