Many of us at Mount Madonna School were sad to hear the news that former U.S. Secretary of State George P. Shultz passed away on Feb. 6 at the age of 100, as we had formed a special bond with him over the past 15 years. 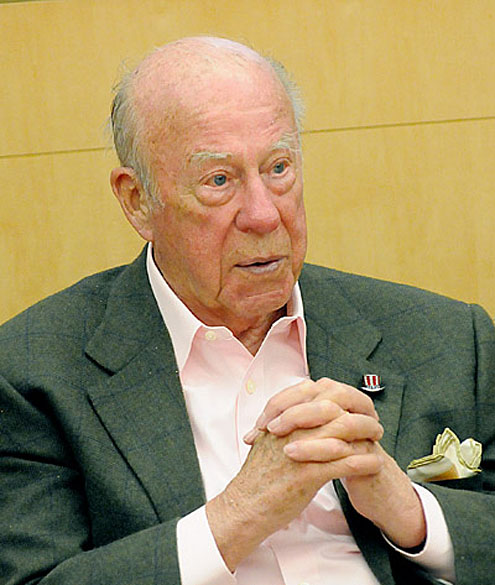 It was an honor to have the privilege of introducing so many Mount Madonna School students to Secretary Shultz. Beginning in 2008 we were able to take groups of students to interview him at the Hoover Institution at Stanford University.

On those visits, just to sit at the large round table in the Annenberg Conference Room where heads of state and government leaders would meet with Secretary Shultz was awe-inspiring all by itself.

Mount Madonna students were always welcomed as honored guests with food, sodas and coffee on the side tables, just as they do for the dignitaries who engaged in that room.

We would arrive, set up our cameras and get organized before Secretary Shultz arrived. His entrance brought us immediately and nervously to our feet, and he would greet each student, putting everyone at ease with a humorous comment or two, and then he would field our questions.

Following each meeting with Secretary Shultz, participating students would reflect on the interview. During our interviews, some of Secretary Shultz’s answers would take time as there is much to say and stories to tell as he reflected on so many years of experience.

He chose his words for clarity and understanding. He was a seasoned diplomat and kindly grandfather figure all rolled into one.

During our 2012 interview, then-senior Aaron Storrs posed his question: “Mr. Secretary, you said in ‘Turmoil and Triumph,’ that you always start with ideas, and if you don’t, you get lost. Later in a Stanford speech you said that, ‘Ideas are a compass.’ Is there a central idea that you started with that has remained with you as a compass throughout your career?”

Here the Secretary’s answer was startlingly brief. He paused for a moment and then replied, “I suppose the central idea is to be honest with yourself. And try to do things that are right.”

There was a moment of silence. Then students realized that is all he is going to say, and his answer begins to sink in. A simple aphorism based on a career of dealing with complex issues. A clear set of markers on a long road of service to the nation.

These moments with Secretary Shultz provide at least one answer to the many questions posed in education today about how to include ethics and values in the content-driven world of our school system.

At Mount Madonna School, we respond to this important need by holding conversations with those who understand, and more importantly, who have lived by the ideal that serving one’s community is a path to meaning and satisfaction in life.

What do the students take away from an experience like this? Following are two revealing excerpts from reflections written by students following their senior-year interviews with Secretary Shultz:

“In this fishbowl we call life, us humans like to consider ourselves intelligent creatures. We are on a constant quest to discover our life’s core purpose. While we work on that one, how about we start with a simple trait: Accountability. What connection do we have if we cannot be relied upon? Who are we if we do not have beliefs, or do not stand up for our beliefs? From completing childhood chores to passing bills in Congress, accountability is all we have. Secretary Shultz has a tie that reads, ‘Democracy is not a spectator sport.’ This means that as an American citizen, I am accountable for paying attention to the political process. No one can make me vote, which leaves me the decision of whom to go and vote for. Deciding whom to vote for requires research; which according to Shultz is a vital factor of being a responsible United States citizen.”

“Interviewing George Shultz was one of the highlights of my senior year…One of my favorite things he said during the interview was in response to a question asked by Imogen about immigrants. He paused a moment before he responded, and then started to speak about what it means to be an American. He discussed a painting of George Washington crossing the Delaware River, saying that most people notice George Washington but if you look at the rest of people in the boat there is great diversity. He spoke on the importance of diversity in the United States and how everyone is an immigrant from somewhere. Finally, he stated, ‘Anyone can come to America and become an American.’ This stood out to me because it is one of things that makes the U.S. unique.”

Secretary Shultz was a consummate teacher with the undeniable gravitas of someone who had “been there and done that” for all the world to see. He spoke softly, so we had to lean in a bit as he wove stories and the principles from which he drew together.

However, these were not just personal stories, they were his personal insight to the events that we read about in the history books. He had seen combat in World War II, and knew firsthand, the true cost of war. It was part of what made him a consummate and thoughtful diplomat. 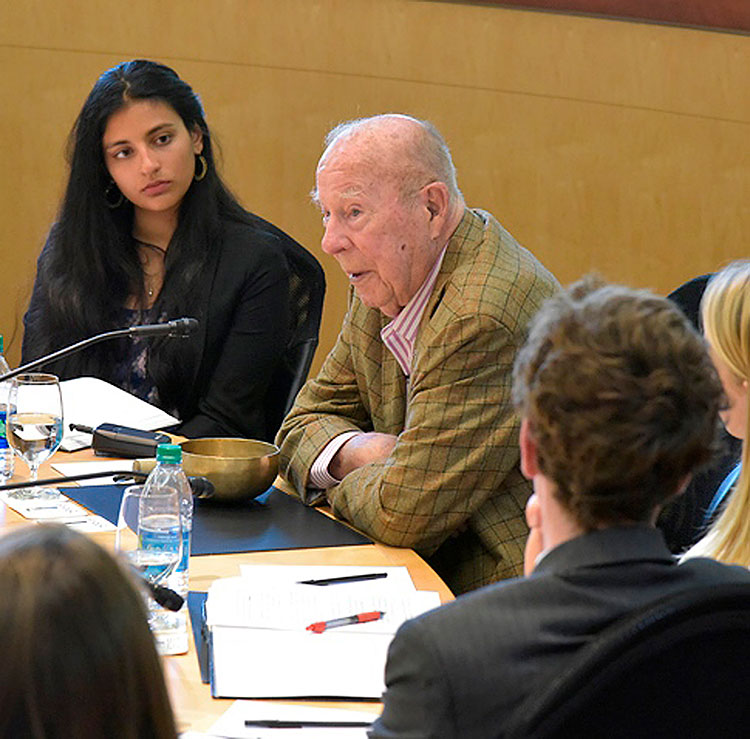 As Secretary of State, he was the man who quietly brought President Ronald Reagan together with the Soviet ambassador one snowy day at the White House, and that lead to the beginning of the SALT talks, leading to a reduction of the nuclear arms race. Secretary Shultz was at the heart of many high-stakes negotiations that eventually led to the ending of the Cold War.

He also showed himself to us a family man and a man of great kindness. Each story had a lesson and in time the students realized that this was someone who learned from his experiences and applied those teachings as he went forward.

I was pleased to hear from many of my students in the past few days, expressing their gratitude for the opportunity to meet and speak with this man of history.

Here are a sampling of those comments:

“Our interviews with Secretary Shultz will forever be remembered as a central and meaningful experience to be cherished. It was an opportunity deserving of great gratitude, as I and the other students were more than fortunate to have been placed in his presence and to hear his advice, insight, and knowledge. Most memorable about Shultz was his presence alone. He presented with a great light; truly eager for the opportunity to speak with younger generations about important issues and to remind us of our potential. When an 18-year-old has the chance to meet with someone who has seen so much…..they better listen because it does not take long to miss something important that was said. The country has lost a great man. A statesman — a Marine. Though he is gone, the impact he made through his noble service to our nation will continue to show and shine as an example for future generations to live up to.”

“Meeting Mr. Shultz was my first encounter with someone who had a hand in shaping the world, yet his humble nature made the conversation honest, deep, and open. I admired his curiosity and dedication to his work. I am so thankful for the chance to have met him and that he would take the time to think through the world’s issues with a group of teenagers.”

“I heard about the passing of George Shultz, and I just wanted to offer my condolences. He was a great man, and I was so honored to have the opportunity to interview and talk with him. I learned a lot from his experiences and am very thankful to have gotten the chance to speak with him.”

When we talk to people who have taken part in history, we come to understand that we as human beings create that history. When we hear that they made history by perseverance, thoughtfulness, integrity and hard work, we know then what we must do.

It is as important for our schools to be as concerned with the content of our students’ character as it is to measure their knowledge of the content of their books. Both are important and neither will serve well without the other.

This is why we make the effort and take the time to prepare for and pursue interviews with those like Secretary George Shultz who contributed so meaningfully to his community and to the world.

It is the character we hope our students will develop regardless of the disciplines they pursue or the jobs they hold. It is part of what makes Mount Madonna School what it is.

We expose the students to the experiences, and we hope, as Secretary Shultz said, that they understand that “values and the ability to interact with people are the most important part of academics.”

A Sight To See in Monterey Bay

PVHS Students Get Their Athletic Field