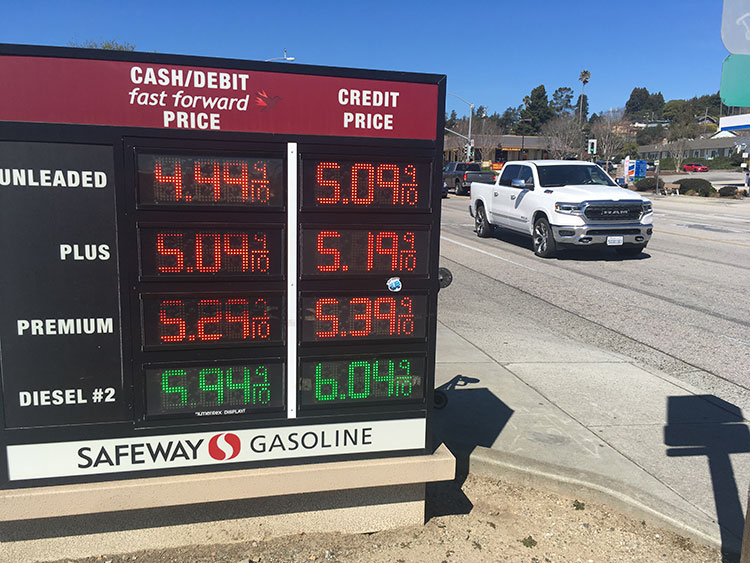 Filling up your tank is painful — a lot more painful — since Russian president Vladimir Putin ordered his military forces to invade Ukraine on Feb. 24. Reuters estimates 1,700 buildings are destroyed, two million people displaced and 13,000 have died.

The price at Union 76 Shell on Mount Hermon Road in Scotts Valley, never one of the less expensive choices, jumped to $5.39 per gallon, then to $5.89 per gallon. 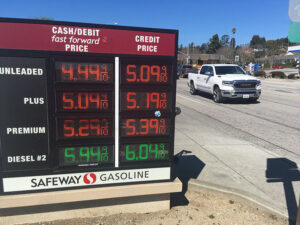 California has the highest gas prices of all 50 states, according to GasBuddy.com, with an average of $5.44 for a gallon of regular unleaded gas vs. $4.68 in Hawaii.

That was on March 8 after President Joe Biden announced a ban on Russian oil, gas and energy imports to the U.S.

Last year, the U.S. imported 245 million barrels of oil from Russia — about 8% of all imports, according to Associated Press — and that was up from 198 million barrels in 2020.

The United Kingdom announced a ban on Russian oil the same day as Biden, but it won’t take effect until 2023. Russian oil makes up 4% of the UK supply.

Shell said it would stop buying Russian crude oil on the spot market, and McDonald’s said it would temporarily close its 850 fast-food restaurants in Russia.

During his State of the Union address March 1, Biden said he would release 30 million barrels from the Strategic Petroleum Reserve, but that didn’t stop the national average price of gasoline from rising to $4.213 per gallon.

One reason for high gas prices in California is the state gas tax, 51 cents per gallon, and due for a hike July 1, with the summer tourism season in full swing.

Soaring gas prices could mean political fallout as this is an election year giving voters an opportunity to cast ballots on June 7 and Nov. 8.

Republican lawmakers proposed to suspend the gas tax for six months, an idea opposed by Democrats who are loath to give up revenue that funds road improvements statewide.

Gov. Gavin Newsom proposed to skip the three-cent gas tax hike in July, but Democrats are not on board.

Assemblyman Kevin Kiley, R-Sacramento, proposes using some of the state’s budget surplus — estimated at $46.5 billion to $69.5 billion — to make up the $4.4 billion in revenue that would be lost during a six-month gas tax holiday. He introduced Assembly Bill 1638 on Jan. 12 to do that.

In Florida, Gov. Ron DeSantis, a Republican, proposes a gas tax holiday for five months. The Florida gas tax is 27 cents per gallon, and unleaded gas costs $4.18 per gallon.

For Santa Cruz County and other parts of the state where tourism is a major part of the economy, the big question is: How will these record gas prices affect families who drive from the Bay Area and Central Valley?

And if they decide to drive here for a visit, how will higher gas prices affect their spending at local restaurants and attractions?

A Yahoo analyst said gas prices would have to reach $5.25 per gallon to be a record high, taking inflation into account.

In Scotts Valley we’re past that point.

Putting Ease in the Giving Season

Covid, Flu or RSV? How Can You Tell?

How to Help Veterans in Need