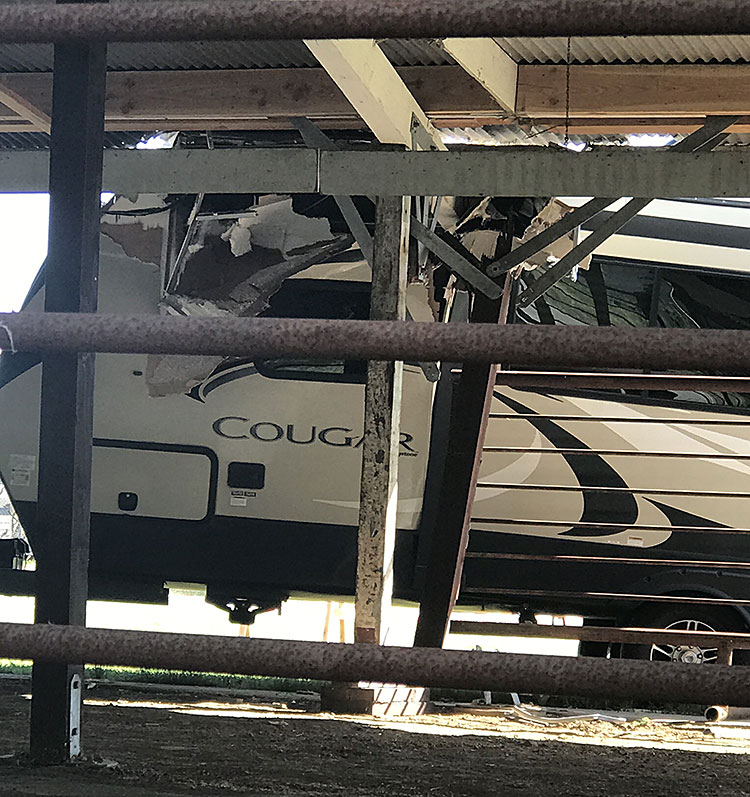 The pig and sheep barns at the Santa Cruz County fairgrounds, in use since 1955, have been declared “unstable and unsafe” by a state agency, and the fair CEO, Dave Kegebein, recommends they be torn down to make way for temporary facilities for 4-H participants showing animals at this year’s fair Sept. 14-18. 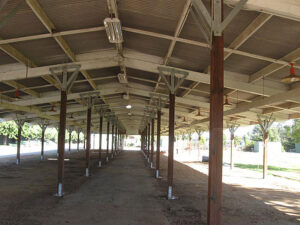 Livestock barn at the county fairgrounds in Watsonville

Long-term, Kegebein proposes putting up a new multi-purpose building he estimates will cost $8 million to $10 million, and phasing in three parts as fundraising allows.

“Tremendous supporters will advance these projects under the right conditions,” he said. “You have to think flexibility.”

The board’s livestock committee, which met July 6, endorsed his recommendation, which goes to the nine-member fair board at a special meeting 6:30 p.m. July 19. See www.santacruzcountyfair.com/board/agenda-items

Jody Belgard, vice president of the board, said a special meeting planned for July 12 was canceled because the agenda was not posted on the fair website 10 days in advance as required.

The Salinas Valley fair, which did a master plan update in 2017, has a nonprofit foundation with 300 members that raised money to build two event centers in 2005 totaling nearly 120,000 square feet.

New construction at the fairgrounds in Watsonville would allow for a service road wider than what exists.

Kegebein sees this as an opportunity to reduce the odds of a mass shooting like the one at the 2019 Gilroy Garlic Festival, where the gunman used bolt cutters to cut through a wire fence and evade security screening.

Kegebein also sees a new facility as a revenue generator, rented for equestrian events, trade shows and other activities while being available for emergency housing for people and livestock, as was needed during the CZU lightning fire. (Santa Cruz County has a contract with the fairgrounds for emergency housing.)

The Chowchilla-Madera County Fair built a new event center after a 2008 fire destroyed the largest building on the grounds rented for the weddings, meetings and fundraisers.

Rental demand is high at the Santa Cruz County fairgrounds.

“We’re full for the rest of the year,” Kegebein said.

Bingo brings a crowd, for one.

No trace of that event could be seen last week when the 14th District fair board livestock committee heard Kegebein’s presentation.

Alternatively to temporary quarters for county fair participants, Kegebein said he had approved plans for an engineered foundation that could be installed before the September 2023 county fair.

Among the livestock committee members, there was consensus to go with “option one,” temporary livestock facilities this year, which means youths showing pigs must bring their own water, and pursue the multi-purpose building for the future. 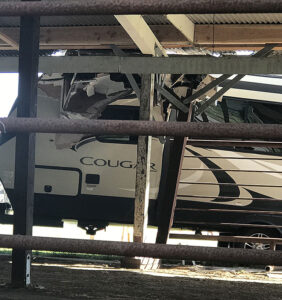 The fairground’s livestock barns were declared unsafe but no “Keep Out” signs were posted on the side where campers were staying.

“Safety is the top priority,” said Kyle Middleton, noting a microphone system would be needed to communicate with the 4-H youth. “I think we can figure out something.”

Kyle Plaskett said, “The sheep barn is maxed out on power,” and he’s seen “a lot of extension cords running around on the grass.”

Loretta Estrada asked about shade for the animals, and Stephanie Fontana observed, “On the lawn, pigs can root out. I’m really concerned about that.”

Danny Naranjo said, “Let’s start with new barns. We’ve got to move with the times.”

The task seems “daunting,” Sowersby said, “but take it one step at a time.”

Philip Carranco, whose daughter raised 300 chickens in Aromas for the fair, said the scale to weigh animals sold for market has to be calibrated on a steady surface, which the barns provided.

Steinbruner said the work was funded by the fairgrounds foundation, a nonprofit run by Jeannie Kegebein, a volunteer who is married to John Kegebein, the father of Dave Kegebein.

Steinbruner said that last year, Dave Kegebein had volunteers remove and replace all the posts and add large timbers to the roof beams, without approval of the fair board or the California Construction Authority, the joint powers authority organized in 1988 to provide finance, design and construction services for health and safety and other projects at fairgrounds throughout California.

Steinbruner believes this agency, which evaluates risks and potential issues before the project begins, should be involved.

She has asked the fair board to have a public discussion on proposed agreements between the fair and the county Board of Supervisors on a 38.5- acre property at 188 Whiting Road, next to the fairgrounds where the County intends to create equitable access to athletic fields, hiking, and healthy recreation. The price is $2.31 million, with a 12-month purchase option ending Nov. 12, 2022.

Steinbruner visited a few CZU fire victims people who were living in 12 to 15 trailers at the fairgrounds, as per the county agreement, in November 2020, learning they paid $900 a month for an RV site. Some got rental assistance from FEMA while others did not know how they would make the payment.

During a severe storm in January 2021 where people were urged to evacuate due to expected “debris flow,” the fair was not prepared to accept evacuated animals, so some were sent to Quail Hollow County Park and some to Animal Services.

If the livestock barns do not exist, Steinbruner asks: How could the fairgrounds provide emergency housing in the future?

Kegebein said the fairgrounds are “fully prepared” with 300 portable pens for small animals that can be set up anywhere.

Also available are the horse barn — with 300 stalls — the cow barn and the poultry barn.

In May, Randy Crabtree Jr., executive director of the California Construction Authority emailed Steinbruner to say “CCA is actively working with the Fair, the design team, the State, and our inspectors to ensure the work is completed correctly to safely operate the barns for its many uses.”

He added, “Santa Cruz County Fairgrounds and the State of California are ultimately responsible for construction scheduling and facility planning. CCA remains ready to assist when requested by any of these bodies.”

No Need to Respond

During his presentation, Kegebein mentioned pushback, adding, “No engineer on this Earth will say it’s OK to use these barns.”

Jessica Ayala of Aromas, who has attended fair meetings for two years, contended that “$100,000 had been poured into the barns for repairs — this is misuse of public funds.”

Asked about those allegations, Kegebein said, “There’s no need for me to respond to that.”

When the livestock committee met July 6, public comment time was reduced, from three minutes to two minutes per speaker.

Steinbruner ran out of time, asked for more, and Stephanie Fontana, the committee chair, said no.

However, volunteers chairing fair departments and listed in Kegebein’s organization chart were allowed to speak without a time limit.