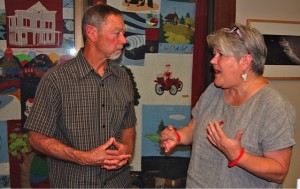 Interest in starting a chapter of the Friends of the Santa Cruz Public Libraries in Aptos drew about 20 library enthusiasts to an informational meeting on October 9, and before they went home nine of them stepped forward to form a steering committee.

According to Friends Executive Director Cordelia Neff, a few others who could not attend the meeting may also join this group. The steering committee set October 30 as the date of its first meeting.

The informational meeting was co-chaired by Friends President Pete Cullen and Library Director Teresa Landers, with Cullen providing an overview of the “big” Friends advocacy and fundraising activities on behalf of the 10-branch Santa Cruz public library system and Landers painting a picture of the branch’s future as envisioned in the master plan developed by the county’s Library Joint Powers Board. Both promised to provide the steering committee guidance and “hand-holding” as they move forward.

Cullen pointed to the Friends chapter in Scotts Valley as a model for fundraising and achievement. The chapter spearheaded a building drive for a new library that opened in 2011. 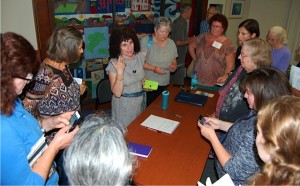 Landers said the Aptos Library, which was built in 1975, would be refurbished and expanded to 11,000 square feet with a 3,500-square-foot addition. She said new, more flexible spaces would be created for library activities and programs, and the power and data infrastructure would be completely updated. “There aren’t enough places for people to plug in,” she noted.

By starting a Friends chapter, “you can have a voice in what you want your library to become,” Cullen counseled. He said fundraising is key, while assuring that “what you raise here stays here.”

A number of people expressed how much the Aptos Branch meant to them, and their willingness to put work into supporting it. One woman said, “I’m amazed at all the wonderful services the library provides, and I would like to give back to it.”