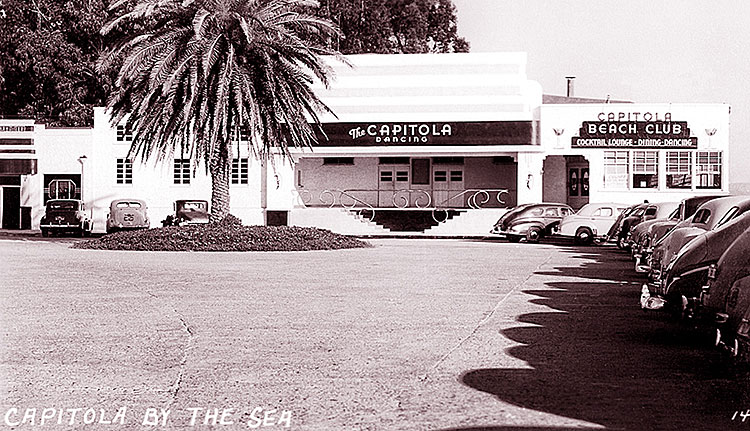 “New Year’s Eve promises to be the biggest night that Capitola has seen in years. The reason is the beautiful new Capitola ballroom, where more than 2,000 merrymakers will celebrate the coming of 1937 with the usual carefree fun that is typical of this popular new resort.”

The New Year’s Eve celebration of 1936 was the first of many held at the new Capitola Ballroom. Amid a flurry of “… balloons, serpentine (streamers), horns, hats, and novelties galore,” patrons danced until 2 a.m. to the music of Stewart Maus and his 12-piece orchestra.

Built in 1935 from a short-lived roller-skating rink, the new ballroom occupied the beachfront site of the famed Hotel Capitola, which burned in 1929 (today the site of Esplanade Park). The new music and dance venue, along with the adjoining Capitola Beach Club, helped usher in a new era for the seaside resort. From the late 1930s to the early 1950s, the Capitola Ballroom featured top dance orchestras and visiting jazz musicians.

The Capitola Ballroom and Capitola Beach Club, circa 1940s.

The Capitola Ballroom featured dancing every Wednesday and Saturday nights. In 1937 the dance floor was enlarged, and a new direct radio hookup allowed the ballroom’s music to be broadcast over the Northern California network.

Though the beachfront location of the ballroom drew the crowds, it also had its drawbacks. A storm in January 1939 swept waves through the double doors and into the ballroom. Sand was carried over the floor, nearly to the bandstand. Ballroom manager “E. Vetterle hurriedly called out a crew of workers with brooms and sawdust to dry the floor. Mr. Vetterle said the floor would be resanded, waxed and in shape for business Saturday night.”

One of the early jazz headliners to appear at the Capitola Ballroom was the “Queen of Swing” herself, Ella Fitzgerald. Twice in the summer of 1940, she appeared with the 16-piece orchestra, led by “torrid trumpeter” Taft Jordan. The July 24, 1940, Santa Cruz Sentinel, described her music as “… the pulsating rhythm which is characteristic of negro music.” Another jazz great appeared later that year. Louis Armstrong, the “Trumpet King of Swing,” and his orchestra entertained Halloween revelers. One advertisement touted Armstrong as the “highest paid Negro Musician in the world.”

The year 1940 also saw improvements made to the Capitola Beach Club by its new owners, the Capitola Investment Company, whose chief stockholders were Lowell and Everett Vetterle. The club was enlarged by 1,350 square feet. One of the two new bars measured eighty feet long, making it the longest bar in Santa Cruz County at the time. The renovation plans included enclosing, with glass, the side of the club extending along Monterey Bay and decorating “… with a nautical motif made up partly of knotty pine.” The original menu of the Capitola Beach Club featured southern cuisine prepared by “colored chefs.” In 1940 the dining room was leased to Bill Jung, owner of the Rice Bowl in Santa Cruz. Later the club became known for their $1.50 dinners consisting of tossed green salad, a half-fried chicken, ravioli, and dessert.

During World War II, the nightlife of Capitola slowed to a crawl. The Capitola Ballroom was closed and used for storage. But by 1946 advertisements were already encouraging people to return to “dance in this swank establishment” and enjoy “[w]here the surf rolls beneath your windows as you drink and dine.” In 1947, the Capitola Ballroom scored a coup when they were able to get Duke Ellington after one of his other bookings was cancelled. This was the second time the Duke performed at Capitola. Back in 1938, the famed orchestra leader played “… to one of the largest crowds in the history of the dance hall.”

Into the early 1950s the Capitola Ballroom continued to attract big names in the music business including Harry James and Lionel Hampton. The ballroom’s continued success was attributed to new owner and local resident Jim Scott, who had previous experience in the dance promotion business.

The year 1954 brought an end to an era when the Capitola Ballroom closed.

Another local, Brad Macdonald, founder of Shadowbrook Restaurant, renovated the ballroom by adding a South Pacific islands theme. The new Saba (pronounced SAY-bah) and Caribbean Nightclub became a local, but short-lived favorite. The Saba burned to the ground in 1957, ironically suffering the same fate, on the same site, as the Hotel Capitola back in 1929.

Deborah Osterberg is the curator of the Capitola Historical Museum. The museum’s regular hours are Friday thru Sunday, Noon-4 p.m. Call 464-0322 for more information.

The First People of Capitola