The Story of Dominican Hospital 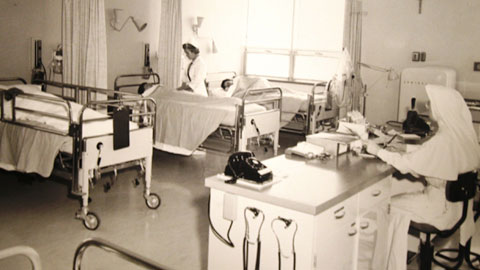 75 Years Since The Order of Sisters Started It All 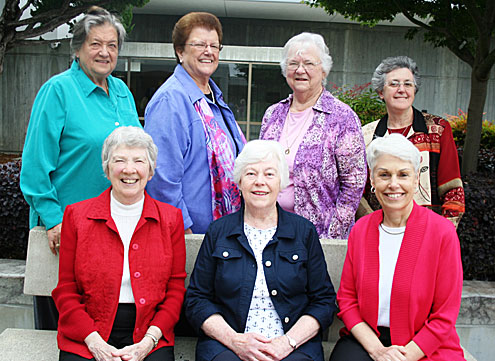 For the Dominican Sisters of Adrian, Michigan, accustomed to harsh midwestern winters, Bishop Philip G. Scher’s invitation to take over a hospital in Santa Cruz, California, should have been a gift. But when the first four Adrian Sisters arrived in Santa Cruz on Aug. 9, 1941, they found a dismal sight.

The building on West Cliff Drive (formerly known as Hanly Hospital) had been empty for nearly a year. “It was as if someone had rung a bell and everyone had left, leaving everything behind,” Sister Georganne Duggan said. “It was a sad state of a building,” says Sister Rita Eileen Dean, OP, vice president of mission integration at Dominican Hospital.

The Sisters got to work—cleaning, polishing medical instruments, and meeting local doctors. They also prepared living quarters for themselves in one corridor of the building. Within one month, the hospital was ready to open, though conditions were still rough. 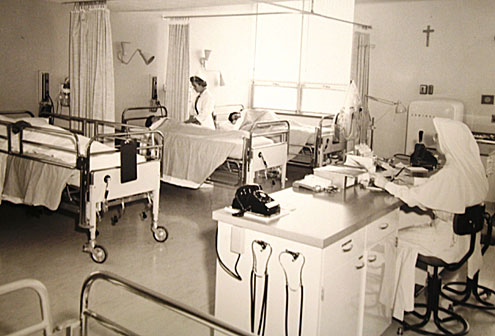 Bishop Scher dedicated the 18-bed Sisters Hospital on Sept. 14, 1941, and the first patient was admitted that night. The Sisters did everything: cooked, cleaned, helped deliver babies, and provided all aspects of patient care. Patients would often pay with chickens, eggs, and produce, as funds were tight during the war years.

The Sisters felt the effects of World War II in that early period. They followed Civil Defense directives, making blackout curtains and putting them up when there was a drill. In the years after the war, it became clear that the hospital needed more space.

“People in the community knew they could get good care there,” says Sister Adrienne Piennette, OP, volunteer services coordinator.

After a complex real estate transaction, the Sisters purchased the 49-bed Santa Cruz Hospital on Soquel Avenue in 1949 (where Branciforte Plaza stands today), rededicating it as Dominican Santa Cruz Hospital on May 5, 1951. Modernization efforts continued with the addition of a laboratory and X-ray, pharmacy, and dietary services. “It started to look like a real hospital,” says Sr. Michaella. The Sisters operated the two hospitals concurrently until Sisters Hospital officially closed its doors on Dec. 22, 1967.

As the community continued to grow, the Sisters recognized that further expansion was necessary. In 1966, they purchased 17 acres on the outskirts of Santa Cruz, and the new Dominican Santa Cruz Hospital on Soquel Drive broke ground later that year. All services were consolidated at this site, and it is Dominican’s home to this day.

The Church underwent major changes in the early ’60s, and the Dominican Sisters traded in religious dress for secular. Today, visitors may see a Sister wearing a lapel pin with the Adrian Dominican logo depicting a wedge of light breaking through darkness.

In 1988, the hospital joined what was then known as Catholic Healthcare West; in 1990, a second campus on Frederick Street opened focusing on rehabilitation and outpatient services. The tenets of community outreach and help for those in need remained driving values for Dominican—and Dignity Health—as it moved into the 21st century.

Yet their ideals hold strong as the hospital looks toward the future.

“We continue to pride ourselves on our Adrian values to seek truth, make peace, and reverence life, as well as dignity, collaboration, justice, stewardship, and excellence,” says Sr. Rita. “These are the values of the Dominicans and of Dignity Health.”

Dominican Hospital has evolved as well to offer the surrounding community the kind of cutting-edge technology typically reserved for large metropolitan areas, including: the Transcatheter Aortic Valve Replacement (TAVR) procedure, which allows for heart valve replacement without opening a patient’s chest; the only Level III Neonatal Intensive Care Unit in the county through a partnership with Lucile Packard Children’s Hospital Stanford; the most advanced mammography technology, 3D tomosynthesis; state-of-the art neurosurgery offered through a partnership with Stanford Health Care; an award-winning Total Joint Replacement program nationally recognized for quality.

The First People of Capitola