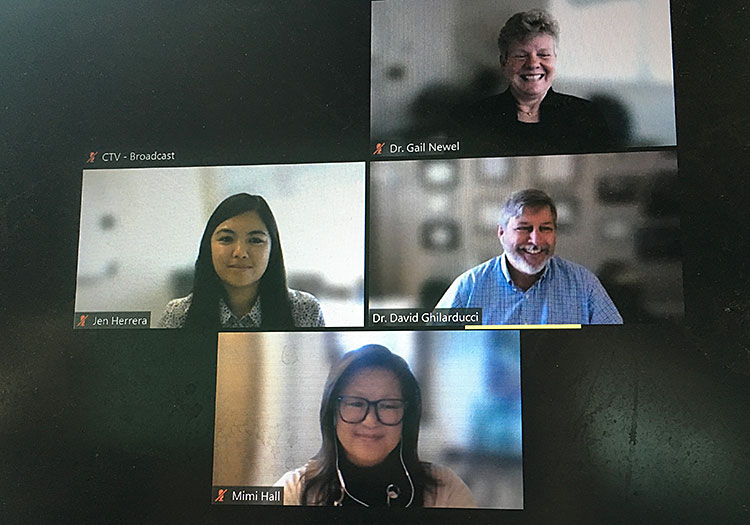 At an online press conference Thursday and a Friday town hall with County Supervisor Zach Friend, Newell urged everyone, vaccinated or not, to mask indoors and in public, and also outdoors in a crowd, get vaccinated if you have not, and stay home and isolate for 14 days if you have symptoms of the Delta variant.

Those symptoms are: Sneezing, sniffles, sore throat and eye irritation – unlike the early version of the coronavirus, when the early warning sign was a cough.

Asked if people attending the upcoming art and wine festivals in Scotts Valley and Capitola, the county fair and the Capitola beach festival should wear masks, Newel said, “I would hope so,” emphasizing that protection is needed at crowded outdoor events.

She advised having a mask in your pocket, ready to use if outdoor conditions become crowded. At a Community Bridges event where she spoke, the gathering was outdoors, attendance was limited, and she was masked until dinner.

“When I’m not eating or drinking I put my mask back on,” she said.

The county is seeing 40 new cases a day, up from two or three, boosting the number of active cases to 687, up from 40 in June.

Newel contends the risk can be mitigated for children returning to school for in-person instruction with state-mandated teacher vaccinations, weekly testing if not fully vaccinated, and mask-wearing by students and school staff indoors.

“I want to offer words of reassurance to parents,” said Newel, noting she, too, is a parent. “The best thing is to get kids back into school.”

With California’s test positivity at 5.2 percent, the state Department of Public Health issued a mandate July 26 for all health care workers including dental staff, all state employees and jail staff, and all employees at homeless shelters and adult care facilities to show proof of full vaccination or be tested weekly.

The state’s Aug. 11 vaccine or test mandate applies to all transitional kindergarten through12th grade teachers and support staff at public and private schools, and must be fully implemented by Oct. 15. 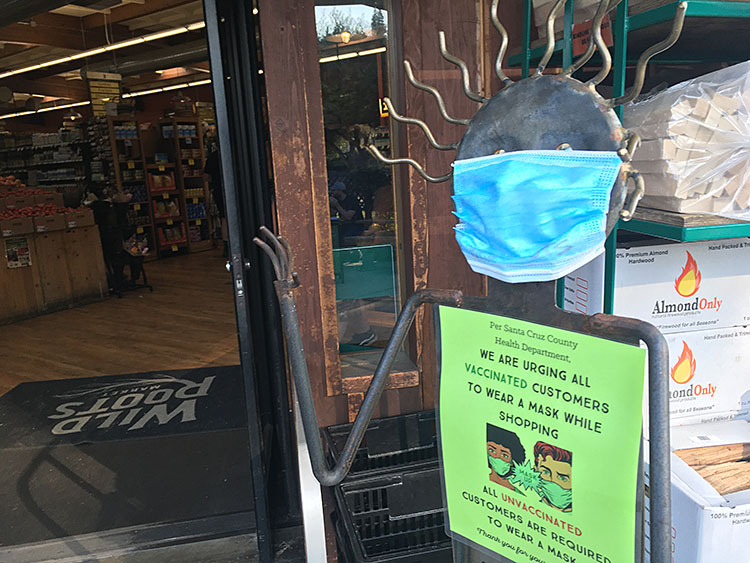 On July 30, Wild Roots Market in Felton urged unvaccinated customers to wear a mask while shopping. Now the county health officer urges everyone, vaccinated or not, to wear a mask indoors to prevent the COVID-19 Delta variant from spreading. • Photo Credit: Jondi Gumz

That is not the case in Santa Cruz County.

At the time, local case rates were much lower, putting Santa Cruz County in the yellow tier, Newel said, but the fast-spreading Delta pushed the county into the orange tier last week and now the red tier.

She’s weighing a decision on a mandate, but is reluctant to do so, saying she would rather prioritize vaccines than have law enforcement focus on masks.

She has two more reasons.

“I follow the science,” she said.  “The science is not completely clear about whether a masking mandate would be helpful.”

She added, “I don’t believe an order would change behavior.”

Meanwhile, hospitals are full of patients who do not have COVID – people getting procedures they put off last year – adding to the workload at a time when medical facilities are short-staffed.

“Staffed (hospital) beds are half,” she said, “just one or two ICU beds open.”

Some staff are taking “well-deserved vacations” after waiting for 18 months, she said, and some are struggling with child care or elder care.

Dr. David Ghilarducci, deputy county health officer, said some are on a leave of absence or have resigned.

“People have been through a brutal year,” he said. “They’re still recovering.”

The Aptos Times asked Dignity Health Dominican Hospital for an assessment, but did not get a response by deadline.

Watsonville Community Hospital provided this statement: “We currently have sufficient staff to safely care for all patients who come to Watsonville Community Hospital. We have been successful in recruiting new staff, and we are increasing our efforts to hire additional staff to mitigate any challenges that may arise in the future. Any time a hospital is unable to take additional patients, for any reason, ambulances are routinely diverted to other area hospitals depending on their available capacity.”

Newel said the two people who died — the county’s first COVID-19 deaths since May — were unvaccinated.

Both had the Delta variant. Both were in their 70s. Both had underlying medical conditions.

The one bright spot Newel mentioned is that the Delta variant spreads quickly, incubates quickly and resolves quickly.

Predictions are the situation will peak in September and resolve by mid-October, before the holidays, which Newel hopes will be the case. She has an international trip planned, and hopes she’ll feel safe enough to travel.

The difference between this surge and prior surges, Newel said, is more cases in North County (specifically Ben Lomond, 59 percent fully vaccinated, and Boulder Creek) compared to South County, more in the white population than Latinx population, and more with the source unknown rather than from someone in the same household.

In July, outbreaks hit San Lorenzo Valley, at the Felton Music Hall which instituted a vaccine requirement for staff, Little People’s Repertory Theatre in Ben Lomond, which cancelled its production, Joe’s Bar in Boulder Creek, which has reopened and is requiring patrons to wear a mask to enter, the historic Brookdale Lodge, which hosted a car show and now has limited hours for the bar and market to keep people safe.

Unlike the first surge, which spread among residents of nursing homes and assisted living facilities, recent cases are mostly people age 25 to 50 who “tend to be more socially active and less likely to follow masking and social distancing guidance,” Newel said.

He said 66.5 percent of the county population are fully vaccinated and 78 percent have had one shot – not taking into account kids under 12 who are not eligible.

“Decent numbers but not good enough,” Ghilarducci said, advising those unvaccinated to check www.santacruzhealth.org under vaccines for a calendar of pop-up clinics.

In August, vaccines were offered on 18 of 31 days, and six dates have been scheduled for September.

Newel said the benefits of being vaccinated if you do get the Delta variant, you will likely have a mild case and you’ll reduce your risk of hospitalization or death, easing pressure on hospitals.

The challenge for public health officials is that the typical tool of contact tracing to combat spread doesn’t work with the Delta variant.

“Within two days, it’s already shedding virus,” said Mimi Hall, director of the county’s Health Services Agency. “By the time a test is performed, it’s too late for contact tracing.”

Half the people contacted about their exposure now are not willing to cooperate, she added.

Though case counts are up dramatically, Jen Herrera, assistant director of Health Services, said the county plans to stick with updating the county coronavirus dashboard at santacruzhealth.org twice a week rather than daily, as was done when the pandemic began last year.

She said a 14-day change metric has been added to provide trend data. On Aug. 13, new COVID cases were up 141 percent, compared to less than 5 percent in June.

Asked about herd immunity, the concept that a disease is less likely to spread if a large percentage of the population is immune, Newel said, “It does not have a specific number.”

The phrase, “herd immunity,” appears in the title of an article in 1923 in the journal Epidemiology & Infection relating to bacterial infection among mice.

In 1933, Dr. Arthur Hedrich wrote in the American Journal of Epidemiology that outbreaks of measles in Boston during 1900-1933 appeared to decline when 68% of the children contracted the virus.

Since then, the herd immunity concept has been applied to vaccines for various contagious diseases, but this coronavirus behaves differently.

Ghilarducci said, “Some are saying herd immunity is elusive at this point when Delta is so transmissible.”

On Aug. 13, responding to a masking question, Newel said, “I’m masking in every indoor setting…it’s an easy way to protect yourself. I err on the side of caution.”

Asked if ivermectin, an anti-parasitic drug that reduced symptoms in Egypt, reduced cases in cities in Brazil and prevented mortality at a nursing home in France, could be useful, Newel said, “Ivermectin has proven to not be impactful in treating or preventing COVID-19, sorry to say.”

When Aptos Times asked if her assessment was based on a lack of randomized controlled trials, she said, “I follow the lead of local infectious disease experts…We are not seeing it used locally or statewide.”

Supervisor Zach Friend said Washington,D.C. is providing COVID-19 testing kits free of charge at libraries. He asked if that could be considered.

Newel said RiteAID, CVS and Costco sell COVID-19 testing kits, two for $25, the same one used by the county to get rapid results, with the downside that the county does not see the results.

“The library is an interesting idea — I’m not sure we’ll go there yet,” she said.

Testing is free through Optum Serve 7 a.m. to 7 p.m. Monday through Friday at the Santa Cruz Civic auditorium and 7 a.m. to 7 p.m Wednesday through Sunday at Ramsay Park in Watsonville. Appointments are required. To schedule, visit https://lhi.care/covidtesting and register, then pick your location.

Deaths from COVID-19 in Santa Cruz County have risen from 207 to 209, with 49 percent of deaths at nursing homes and assisted living facilities, a percentage that was higher early in the pandemic.

Locally, 78 percent of those who died were age 70 or older and 78 percent had other health conditions.

The state reports 3,994,271 cases, 45 million vaccine doses, with 78 percent of the eligible population getting at least one dose. Deaths top 64,000, averaging 60 per day the last three days. During last winter’s peak, as many as 700 fatalities a day were reported.