Home Our Town To Ukraine, With Love
Our Town

To Ukraine, With Love 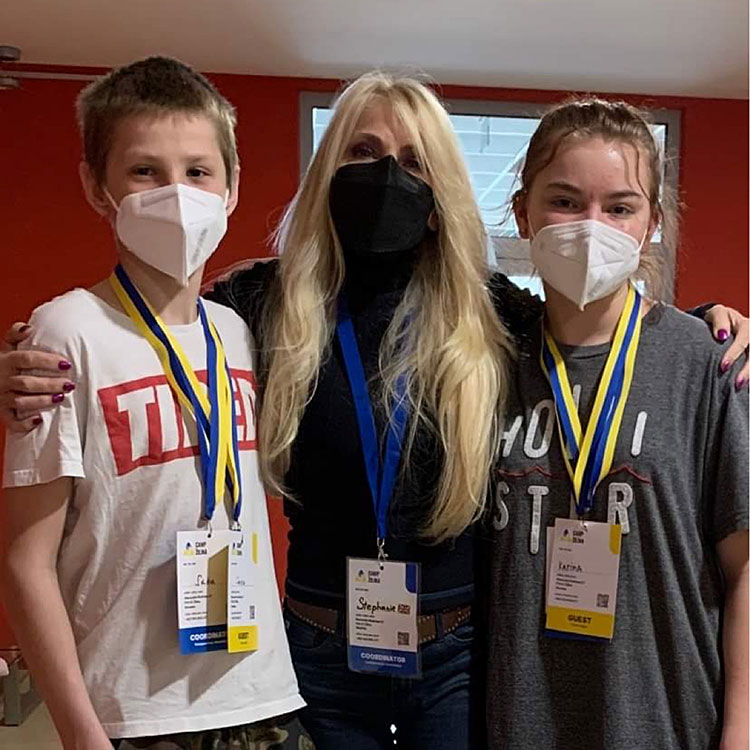 Before Russia invaded Ukraine, Milan Dubec was a tech CEO in neighboring Slovakia.

After the invasion, he turned his office buildings into shelters, helping 2,000 Ukrainian refugees eat, shower and rest, providing clothing and shoes, funding relief efforts himself, with his sister-in-law in Wales on the phone trying to raise money. 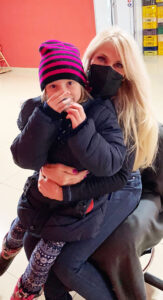 Stephanie Jenkins with one of the children at Camp Zilina.

A nutritionist with expertise in “mobile feeding,” she searched online, discovered what Milan and his wife Renata were doing in Zilina, Slovakia, near the Czech and Polish borders, and flew to Vienna, Austria, where a driver brought her to Zilina for a three-week stay.

She did not know the Slovak language, but that was no matter.

“I’ve got Google translate,” she said before she left on a 27-hour flight. “I’m trying to learn a couple words. It’s amazing how you can talk with your heart.”

She is now a friend of Milan Dubec on Facebook and has emailed photos of some of the child refugees she is assisting.

On April 16, Milan Dubec thanked Jenkins for coming from California and Theresann Uphoff for coming from the United Kingdom to help at Camp Zilina. Many people from abroad have helped with supplies, he added.

On April 22, Milan Dubec posted on Facebook: “War conflict changes people’s lives, but it does not change their faith, which is a source of strength and hope for many refugees.”

For Paschy, derived from the Hebrew word for Passover and one of the biggest holidays for Orthodox believers, volunteers from Camp Zilina are organizing a festive liturgy April 23 in the parking lot, with Easter cakes and a traditional basket filled with sausages, bacon, vegetables, wine, and Easter eggs. 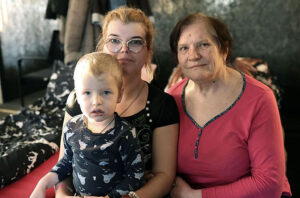 They come from the city of Dnipro. They left for the bombing. They went by train to Čop, from Čop by bus to Košice and an older son, who came with another family to Liptovský Mikuláš, advised them to go to Žilina. Husband stayed in Ukraine. They consider that they will only stay here for the necessary time, until victory. 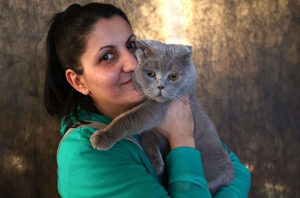 Marija Ivajev and her cat.

She’s running away from war for the second time, coming from the Donec region from the town of Volnovacha. When the fights in Kramatorsko started in 2014, she left for Kiev. When they started bombing Kiev, she went to Lvov, then to Užhorod, where she crossed the Slovak border from where the bus took them to Michalovce. They sent them from Michalovce to Žilina. I really want to go home as soon as possible. 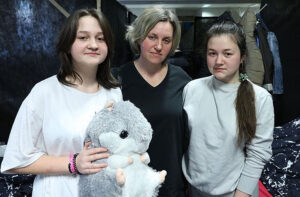 They come from the Kharkiv region, Izjumenskij district. They were leaving quickly when the bombing started, with only 2 backpacks. A pressure wave broke all windows in their house. From the town of Barvinkove 180 km from Charkov, they traveled by train to Užhorod. The border was crossed by foot through Veľké Slemence. From there, the bus brought them to Košice and from Košice, they traveled to Žilina. Their parents stayed in Ukraine because their health conditions did not allow them to go. They want to return home as soon as possible.

The Camp Zilina story reached the president of the Slovak Republic, Zuzana Čaputová, who came April 14 to voice her support.

Milan Dubec wrote: “Her visit was an encouragement to us and all the volunteers.”

Jenkins, who was with the Red Cross for seven years, is used to volunteering in domestic disasters. She’s worked with World Central Kitchen, the nonprofit founded by celebrity chef José Andrés, but she had not taken the training necessary for a Red Cross international mission.

When she saw a maternity hospital in Ukraine bombed, she was motivated to act.

Searching online, she connected with Milan’s sister-in-law, Viera Surovcakova Matysakova, on Facebook Messenger, and learned that Milan and his wife were exhausted and desperately needed someone to manage the refugee shelters.

Jenkins learned host families were stepping up to take in refugees.

She was aghast that children are without parents — “all the dads have to stay” to defend Ukraine.
As of April 4, some 2,000 refugees fleeing Ukraine have come to the aid center set up by Milan Dubec and registered in the Ukrainian Spilka (association or union), where they can obtain humanitarian aid, prepare a resume and apply for temporary asylum.

For mothers who want to stay, Milan Dubec has started a free course in the Slovak language “so they can stay and work here” with a day camp for their children to learn the language.

He explains, “Nobody knows how long the war in Ukraine will last, nor how long the reconstruction of the destroyed infrastructure of Ukraine will last. Many people will not have a place to return … Language knowledge is the cornerstone of staying in Slovakia for a longer term and not dependent on the help of volunteers or the state. This would not burden our system, but those who would like to stay for a long time and contribute in the form of taxes and taxes to our country, which has always been proud of being friendly to its guests.”