Home Our Town Will Labor Shortage Cripple Recovery?
Our Town

Have you noticed the labor shortage in Santa Cruz County?

Unemployment is at 6.6 percent — the lowest since the COVID-19 pandemic arrived in March 2020. 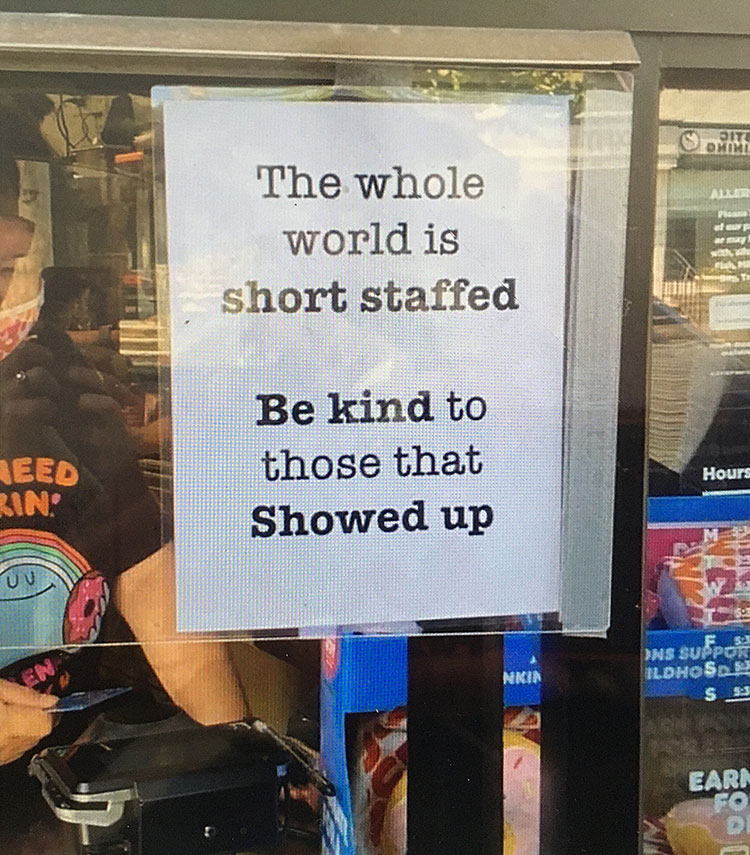 Analysts say the pandemic, which forced schools into online learning for students staying at home, made it especially hard for working mothers to go back to work. Some moms may not want to risk exposure to the
Delta variant, which spreads more easily than the initial coronavirus.

In August, The New York Times talked with restaurant owners and managers who said they faced higher costs and difficulty finding cooks and wait staff because of the $300-a-week COVID boost in federal unemployment. That ends on Labor Day, Sept. 6.

However, workers in kitchens and bartenders told the Times about working 80 hours a week, being underpaid, underappreciated and even sexual harassed by customers.

Local employers have jobs they haven’t been able to fill.

That’s why Ella’s at the Airport in Watsonville hasn’t started a Sunday brunch – not enough people on staff.

That’s why Wild Roots Market in Felton posted a sign about openings for a cook and a deli clerk.

“We will hire staff as soon as they become available,” the notice said.

Meanwhile, the deli is not able to serve hot bar food for lunch or dinner and service ends at 7 p.m. 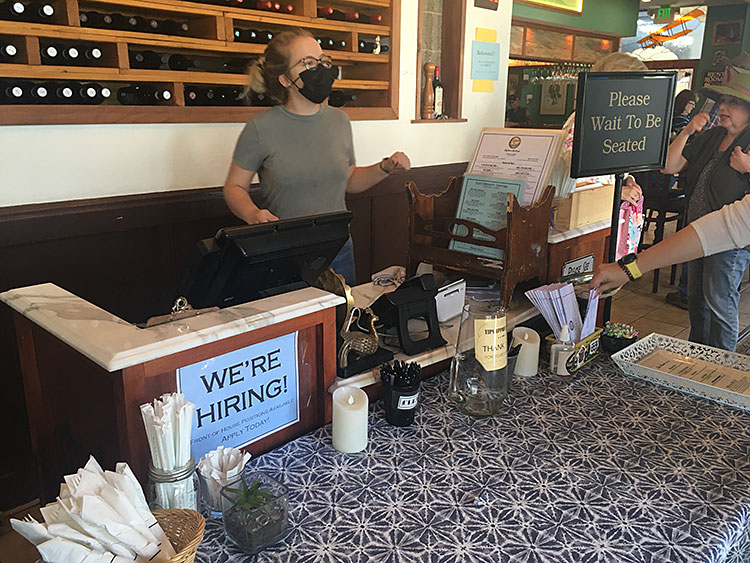 Ella’s at the Airport in Watsonville is hiring. • Photo Credit: Jondi Gumz

Dr. Duncan McCollum, a chiropractor, is looking someone to join his office staff in Brown Ranch Marketplace in Capitola.

In the same shopping center, Roux Dat restaurant is hiring. So is Paradise Tanning, and Bed Bath & Beyond.

Spirit Halloween, which opened at the Capitola Mall in the former Sears space, is hiring.

Many new positions with pay topping $35 an hour were posted in the past week on Indeed.com.

Housing Matters, a nonprofit in Santa Cruz, is looking for an individual giving officer; pay starts at $81,120.

In Watsonville, GraniteRock, CalGiant, Nordic Naturals, and Martinelli all have manager jobs open.

Teamsters Local 853 hosted an in-person job job fair July 10 in San Jose, the first since the pandemic began, with 15 employers wanting to fill 150 “good union jobs” as drivers and in manufacturing and warehousing. Another in-person job fair is scheduled for Aug. 28 in Oakland in the Teamsters’ parking lot, offering 200 “high-paying union jobs” in the same categories as before.

For Ken Whiting, president of Whiting’s Food Concessions, which operates at the Santa Cruz Beach Boardwalk, the labor shortage is real.

He posted on LinkedIn a sign in a store window saying, “The whole world is short staffed. Be kind to those who showed up.”

Count is on the 12 of the month

* Includes commuting to jobs outside county