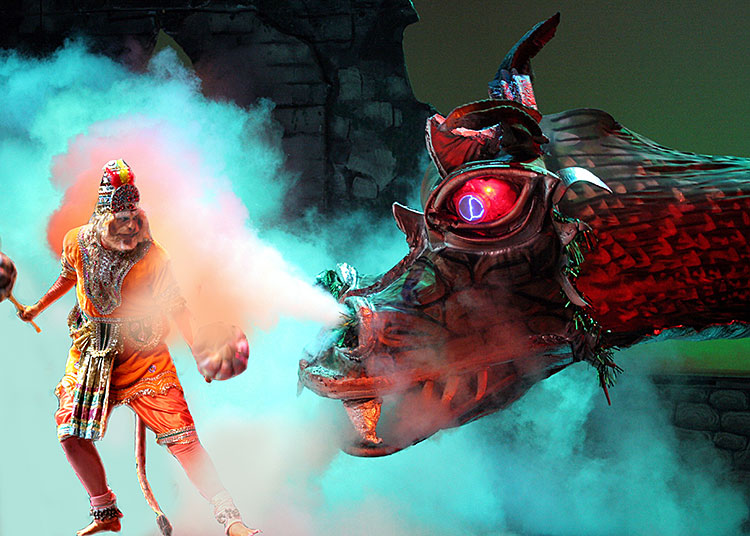 Join Hanuman, the monkeys, Prince Rama and Prince Lakshmana, as they journey to Lanka in their quest to rescue Princess Sita in the 43rd Mount Madonna School performance of “Ramayana!”, a musical theater production adapted for modern audiences and replete with lively action, dazzling costumes, humor and life lessons. 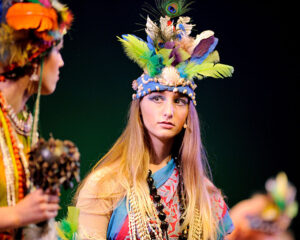 “Ramayana!” returns June 9-12 as a live stage show for the first time in two years after being disrupted by Covid. The venue will be the Mexican Heritage Theater in San Jose. All seats are reserved; tickets are at ramayana.brownpapertickets.com.

With a cast of 175 students ranging from preschool to high school, “Ramayana!” includes traditional and contemporary music and features an adult choir and musicians, with more than a dozen original standout songs.

“The production of ‘Ramayana!’ has been central to Mount Madonna School since its founding,” said Head of School Ann Goewert. “With this show, we carry forward a tradition inspired by Baba Hari Dass (1923-2018) and supported by the Mount Madonna Center. It’s the culmination of months of work during the academic year and is a year-end celebration for our community embracing diversity and creative self-expression. The Ramayana is a timeless classic teaching the universal values of truth, duty, love and service to the greater good. As students work together to prepare for this ambitious show, they embody the values embedded in the Ramayana.”

Mount Madonna Center for the Creative Arts and Sciences is a residential community and conference center founded in 1978 atop a mountain in Watsonville. Baba Hari Dass (Babaji), a silent monk, teacher, and practitioner of yoga from India was the inspiration behind the founding of the center, which shares a history and mission with the school, and the annual performance of the “Ramayana!” is part of this mission.

The well-known tale with origins in India was adapted into a musical by members of the Mount Madonna community in the 1970s. The original songs are part of the American rock musical theater tradition, with echoes of “Hair” and “Jesus Christ Superstar.” 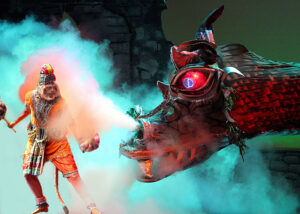 “This story was brought to us by Babaji, who was also the inspiration for founding MMC and the school,” said director Gitanjali Rivera, “and it not only connects us to a tale from India that’s thousands of years old, but also to the very roots of our community. This whole-school production brings together all MMS students, big buddies and little buddies, connecting them in ways they may not otherwise share during the school year.”

The performing arts team endeavors to “create space” for young actors to instill their own creativity, imagination and ownership of their parts, and their play. The development of theatrical skills and strengthening of confidence to be bold in presentation are woven into the team’s time with the students.

“All myths have lessons for us, regardless of the cultural tradition or origin,” said Rivera. “These myths, including ‘Ramayana!’, tell universal stories of good versus evil, of devotion to something greater than our own individual selves and the importance of creating a community of service. Whether a student has been in “Ramayana!’ for one year or 15 years, these lessons have a way seeping into one’s mind and actions, and as students embody these life lessons onstage, they are also absorbed into other aspects of their lives.”

The current version of the show features choreographed fight scenes, monkeys and monsters, comedy, deep introspection by many characters, including King Ravana in his ten-headed costume.

The costumes, demon and monkey masks, elaborate sets, props, and monster rigs (such as Kumbhakarna, a 25-foot puppet with a radio-controlled mechanical mouth and eyes) were created by Baba Hari Dass, as well as artisans associated with both the center and the school. Every item in the show is a work of handmade art.

The show was canceled in 2020 due to the pandemic. In 2021, performers created the show, which was turned into a film and streamed on Vimeo.

Now in its 43rd iteration, “Ramayana!” is a major contribution to the artistic and cultural life of the area, the expression of a living tradition with ties to India and the global Indian diaspora, and a treasure for generations of students and theater-goers.

“Every character in the “Ramayana!” story represents an aspect of one’s personality,” said Rivera. “There is the devotional service that Hanuman represents, the greed and pride exuded by Ravana, and the sense of duty and righteousness embodied by Rama — these are all aspects of human nature that we each possess, and like all morality tales, the good and the virtuous are what ultimately triumphs.”